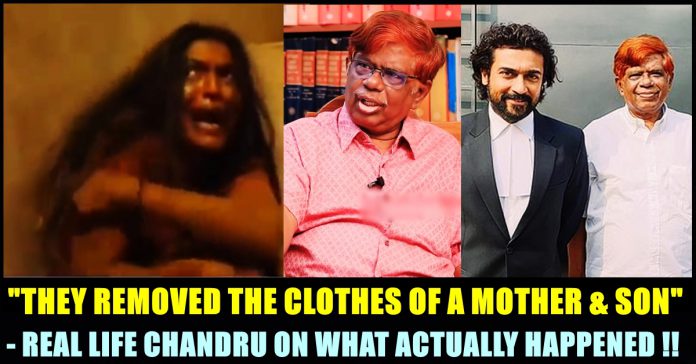 Justice Chandru, a case handled by whom was made into a film named “Jai Bhim”, in an interview, said that much more severe police brutality took place during the interrogation of the case. He said that judges looked into the case seriously only after they came to know about Police removed the clothes of a Mother and a son and forced them to have intercourse. The statement sent shockwaves among the public with people expressing their dejection over such police officials.

“Jai Bhim” became the talking point of state Tamil nadu ever since it got released in Amazon Prime on 2nd of November. The subject discussed by the film shook not only cinema audience but also Tamil nadu Chief minister MK Stalin who came up with a note lauding the film crew for pulling off such a project. The film which is based on a case that took place 25 years ago, is based on a reputed lawyer involving himself in getting justice to a woman who belongs to tribal community.

In the film, Suriya played the role of Justice Chandru who is a former Madras High Court Judge appointed by President Dr. A.P.J Abdul Kalam. In his recent interaction with a private you tube channel, Chandru opened about the intensity of the brutality committed by the cops. When host Aavudaiappan asked him whether the scene where a police removes the clothes of a woman to humiliate the men in the lock up room happened in reality, Chandru says that much more cruel humiliations took place, adding that it grabbed the attention of the judges of the case.

“What was showed in the film is just a sample. Much more brutalities are taking place in daily basis” Chandru said in the interaction. Answering to Aavudai’s question on whether the woman harassment happened in lock up, Chandru said “Incidents such as forcing mother and son to have sexual intercourse after removing their clothes, happened. Main reason for the court to look into the case sincerely is, much more brutal crimes were committed by the cops in this case. The filming of such scenes are less comparing to what really happened”

“Jai Bhim” released on Amazon Prime on 1st of November with much expectations among fans. The film is getting humongous amount of positive response from fans and is being widely watched due to the word of mouth. Based on a true event that happened in the year 1995, the film concentrates on showing light to the hardship people of tribal community went through at that time. Exposing the police brutality, the film shows how lawyer Chandru won the case without receiving a penny from his client who is a wife of the victim. Though the incident took place 25 years ago, it looks still relevant due to the police atrocities that are taking place in the state now.