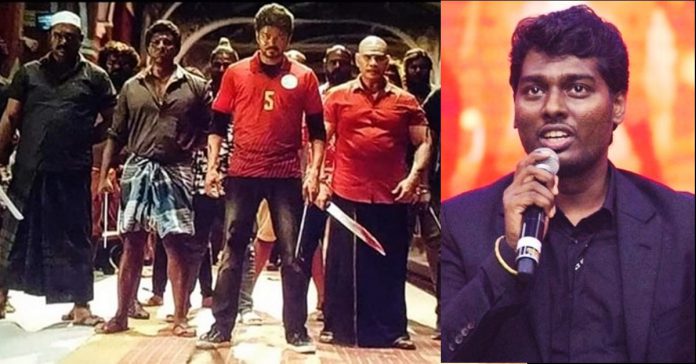 Atlee is arguably, one of the most loved and hated filmmaker of Tamil cinema right now. Being a former assistant of Shankar, Atlee’s way of presenting his films and the castings he choose for the characters are considered as his major qualities. All the three films of Atlee became blockbusters despite of the plagiarism controversies. His recent release “BIGIL” is setting fire in box office as it has actor Vijay in the lead role. The film marks the third collaboration of the duo, after “Theri” and “Mersal”.

The film which has actor Vijay in three different dimensions such as a Football player, a local gangster and as a coach for a state football team. Unlike other Vijay movies, “BIGIL” is facing controversies since the first day of shoot. Assistant director KP Selvah claimed that the story of BIGIL belongs to him and registered case against the makers. Followed by that, when the trailer released, many compared it with Shah Rukh Khan’s Chak De India.

Now to our shock, it has been revealed that an important football scene from the movie “BIGIL” was copied from a popular hollywood film “Pele”. The scene which has a slow motion kind of effect for the players who are playing, was already done in the film American biographical film “Pele”. The film “Pele” is about the early life of Brazilian footballer Pele and his journey with Brazil to win the 1958 FIFA World Cup. It is notable that the music for both the movies were composed by A.R Rahman.

Earlier another football playing scene was caught in controversy for having a technique of an old video. The viral video shows a football player named as Sean Ganier doing the same moves as Vijay with his fellow football player.

What do you think on the similarities between both the scenes ?? Comment your views below !!