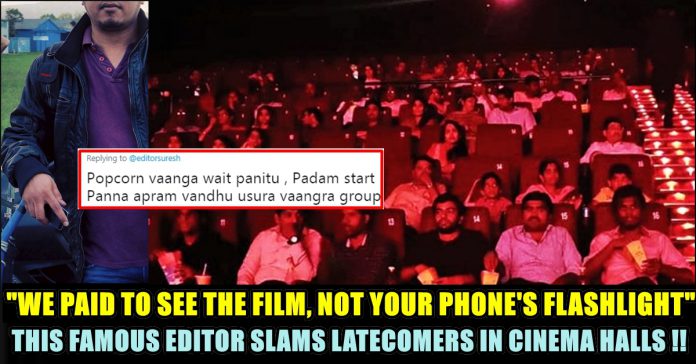 Atleast once in our lifetime, we all experienced that one irritating moment in cinema theatre when a late comer asks us excuse to move our leg or flashing his cell phone torch light in our face in order to find his seat number. 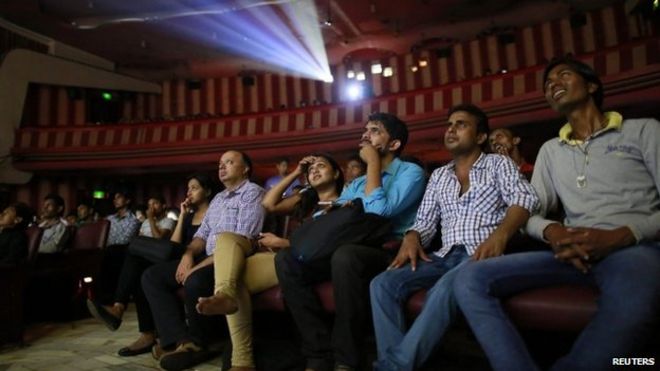 To the contrary, once in our lifetime, we also would have been that one irritating person who goes late to cinema hall due to an unexpected commitment and disturb others who are all set to witness the mass entry of their favourite hero. Not only us, people belong to the field of cinema also facing such embarrassments is what we came to know after seeing this tweet of editor T.S Suresh. Suresh is one of the prominent editors of South cinema who started his career by editing to Tamizh Padam, the only parody movie franchise of Indian cinema. Following that he excelled in the field of editing by working in films like Vishal’s Theeratha Vilayattu Pillai, Irumbuthirai, Simbu’s Vaalu, Kamal’s Thoongavanam etc. The tweet he posted in his official twitter account read as “Dear cinema-goers, Why must you try to find your seats during the opening act when the theatre is dark? We paid to see the film and not your smartphone flashlight. Sincerely, Everyone”

Why must you try to find your seats during the opening act when the theatre is dark? We paid to see the film and not your smartphone flashlight.

His tweet faced various replies from his followers. Some offended on seeing it and some defended it. Check out some of them here :

why cant you try OTT platforms like @netflix@PrimeVideoIN instead. Its more convenient. Theatre is an social gathering and in mass gathering we can’t expect discipline? 🙄🙄🙄

OTT is fine but I prefer theatre for the experience. Nothing like watching a film with a group of unknown people. Also being there on time is a basic thing. Just imagine how people react when a show gets delayed by minutes. 😀

Then comes the ‘back seat footballer’ sigh!

Pissed me off during spider verse.I got a headache coz of it and couldn’t concentrate on the film.

That should be controlled by the greedy theatre owners in not issuing tickets once the movie has started !!!

May be they should stop entry when the lights are turned off, so that you don’t witness flash lights. 😉

Why should u get distracted with that small light

Satyam’s DND show concept should be implemented in all theaters 😂

It would indeed be irritating but what should we do if we have booked the ticket and also have to face the Chennai traffic, Calls from boss, make the whole family get ready on time or that one friend who always comes late ??