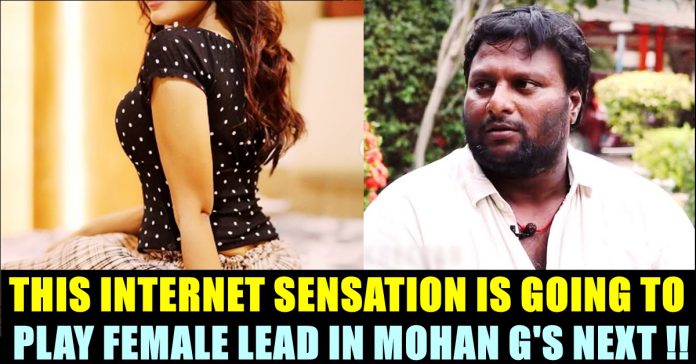 Director of one of the most controversial film of the year “Draupathy” is all set to start his next project it seems. Made with a budget of less than a crore rupees, his film “Draupathy” earned more than 14 crore, according to reports. The digital rights of the film got acquired by Amazon prime and is currently streaming. Now, the filmmaker who debuted through “Pazhaya Vannara Pettai” has started giving updates about his upcoming project which is titled as “Ruthra Thandavam”.

Draupathy film released in theatres on 28th of February and stirred a big time controversy. The film which had actor Richard, brother-in-law of actor Ajithkumar in the lead role became a subject to controversy since the trailer of it released. The “Pazhaya Vannarapettai” fame Mohan’s directorial was highly believed to be a cast based low budget film that made against a particular community and it faced severe criticism across the internet during its release time.

Announcing about his upcoming project, on 25th of October, Mohan G uploaded a tweet saying that they are going to destroy the evilness and save the righteousness. “With the blessings of Lord Shivan, everything will fall in place” his tweet read.

The film is going to have Richard in the lead role. Now, maker of the film has updated about the female lead of the film. Dharsha Gupta who is known for her existence in the photo posting social media application Instagram, has been committed as the heroine for the film.

She is best known for playing the role of “Viji” in a serial named as “Mullum Malarum” that got telecasted in Zee Tamil. She also appeared in serials such as “Minnale” and “Senthoora Poove”. She also got participated in the second season of “Cooku With Comali”, a popular cookery show that is being telecasted in Vijay Television.

Announcing about her debut in his third project, Director Mohan uploaded a tweet in his twitter account in which he is enjoying sixty thousand plus followers. “ருத்ரதாண்டவம் திரைப்படத்தில் கதாநாயகியாக #தர்ஷாகுப்தா அவர்கள் அறிமுகம் ஆகிறார்..” his caption for the post read.

Dharsha is currently five lakh plus followers for her Instagram account. Meme creators often compared her posts and looks with Shivani Narayanan’s, a serial actress and a contestant of current Bigg Boss season. Check out some of the recent Instagram posts of the upcoming actress :