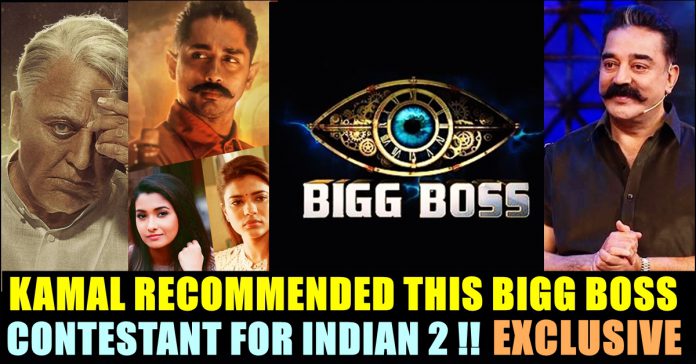 The elimination of Tharshan in Bigg Boss show made an impact in social media as everyone felt it is some sort of injustice to the voters of the show. One of the prominent contestant who was expected to win the title, announced as the evicted contestant by Kamal Haasan just before the finale week of the show which left the audience in utter shock.

They started trending hashtags in Twitter against the channel for evicting Tharshan. Many celebrities including Shanthanu, Harish Kalyan expressed their disappointment on the eviction of Tharshan as well. Yesterday, the aspiring actor posted a video thanking his followers for supporting him.

Now, a latest news has been surfaced that Tharshan was offered a role by Kamal Haasan for his upcoming magnum opus Indian 2. They even met personally regarding the movie opportunity, says news reports.

As soon as this news surfaced, fans of Tharshan celebrated it by expressing their joy in social media platforms. This news consoled them as his abrupt eviction let them dejected in big time.

Hope this News is True… May be because of this reason he invited #Tharshan to meet #kamal sir personally… OMG 😱😱#Tharshanarmy #TharshanPeoplesChamp #TharshanTheRealWinner
No words to express the Happiness 😍😍😍😍😍😍😍😍😍😍😍 pic.twitter.com/MLU0kWsP48

Meanwhile, Libra Production of producer Ravindran who has been expressing his thoughts about Bigg Boss show throughout the 100 days, has also posted a tweet hinting about making a movie with Tharshan.

The tweet of the production house read as “Dear #Tharshan Finally your Game has come to an end, But ur Game in Kollywood will start on high note All the best from @LIBRAProducions”

Unlike other Bigg Boss contestants, Tharshan going to be very busy as an actor it seems. Let us wish the youngster a very best for his future !!