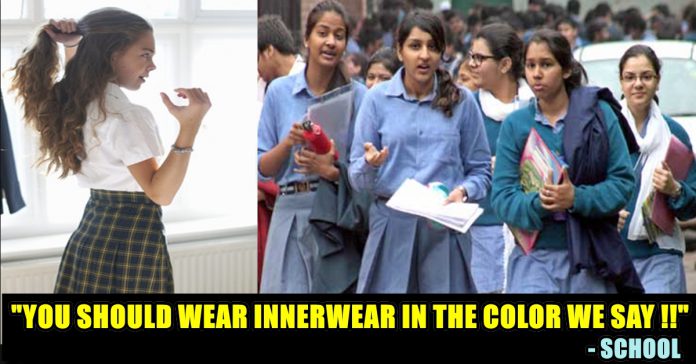 Parents and student of Pune’s Maeer’s MIT School on Wednesday staged a protest against the school’s diktat asking the girl students to wear specific colour innerwear.

The MAEER’s MIT School in Maharashtra’s Pune has issued several guidelines “for the security” of students, including specifying the colour of girls’ innerwear, prompting the state education minister to order a probe into the directives. Apart from this, the school has restricted the students from using the washroom other than the specified time.

“The girls were asked to wear either white or skin colour innerwear. They have even mentioned the length of the skirt to be worn by them. They have all these things in the school diary and have asked us to sign it,” a parent was quoted as saying by news agency ANI. MAEER’s MIT School has also restricted students from using the washroom other than the specified time. It has said action will be taken against students and parents if they fail to abide by the guidelines.

Suchitra Karad Nagare, executive director of MIT Group of Institute, said the intention behind taking such steps were “very pure”.

“All these rules are meant for the security of the students. There is no any other intention. If parents have any objection, they have to approach us. We will definitely find a solution,” Nagare said. Parents and students staged a protest on Wednesday against the school’s diktats and also met the director of primary education at the school to complain about the matter.

“I have directed the education department to conduct a detailed enquiry in this matter. If necessary, we will take action,” state education minister Vinod Tawde said.

The school has also asked students to pay Rs 1,500 annually for cycle parking and parents have been urged to donate books to the school library. Those who donate to the library will get free access and others will have to pay Rs 500 as a deposit and Rs 100 monthly charges.