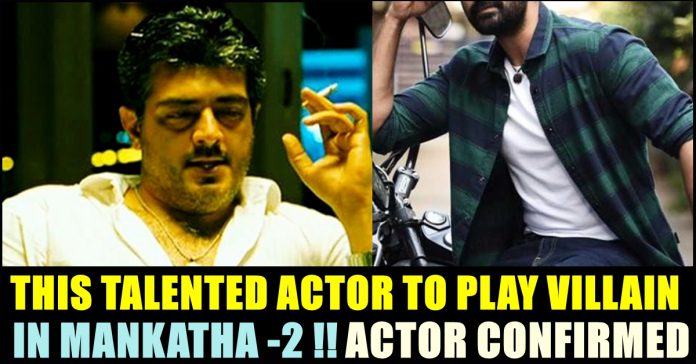 Mankatha is one of the biggest hit for actor Ajith kumar in his acting career. It became the 50th film of the actor who has the most number of fans in the Tamil film industry. Along with Ajithkumar, an ensemble cast involved in the film including Arjun, Trisha, Raai Lakshmi, Anjali, Andrea, Vaibhav, Premji, and Mahat Raghavendra . It was produced by Dhayanidhi Alagiri’s Cloud Nine Movies while Yuvan Shankar Raja composed the musical score.

The film happens to be the favourite film of majority number of fans of the actor. Since Mankatha became a blockbuster, fans are requesting for a sequel to its maker Venkat Prabhu who is busy in his other projects. After Mankatha, Venkat Prabhu made films like Biriyani, Masss and a sequel of his Chennai 600028. Ajith Kumar also became busy by doing so many films. Now the actor is about in appear in H.Vinoth’s Valimai.

Since the announcement of Valimai, fans assumed that actor Prasanna is going to be a part of it. Prasanna is a well known actor among Tamil cinema fans and fans expected him to be the villain for Ajith in Valimai. Now, the actor has posted a tweet saying that he is not taking part in Valimai despite of the talks with the makers.

In his post Prasanna thanked every fan who wished him to be part of “Valimai”. “I was equally thrilled that the talks were on and was hoping to make the biggest announcement of mu career ever. But the unfortunately, this wonderful opportunity to share screen with our “Thala” isn’t happening this time.” said Prasanna and hoped for something positive to happen in the future.

“There always a next time and am sure I will be playing that dream part opposite “Thala” sooner. Love you all so much. Keep sending me your love. That’s all I have got” Prasanna wrote in his post.

Many fans felt bad on seeing this post from the talented actor. Meanwhile, to our surprise, actor and comedian Premji who is a brother of “Mankatha” director Venkat Prabhu indirectly confirmed his part in the sequel of Mankatha-2.

Premji shared Prasanna’s tweet by adding the symbols of playing cards which denoted the word “Mankatha”. The tweet of Premji contained the symbols of Spade, Tree, Heart and Diamond. Check out his tweet here :

Prasanna who couldn’t get the tweet commented by writing “R u saying let’s play rummy??🤥🤣”

Premji replied with a GIF of Mankatha film to confirm his part in the film. Here’s his reply :

More than the roles of protagonist, Prasanna is known for the roles he done as antagonist. Anjathe, Thiruttu Payale-2 are two of most appreciated roles of Prasanna as villain. As Mankatha-2 is on cards, fans are expecting Prasanna to play the villain role in the film. It is notable that Prasanna is also playing the villain in an upcoming film named as “Mafia”.