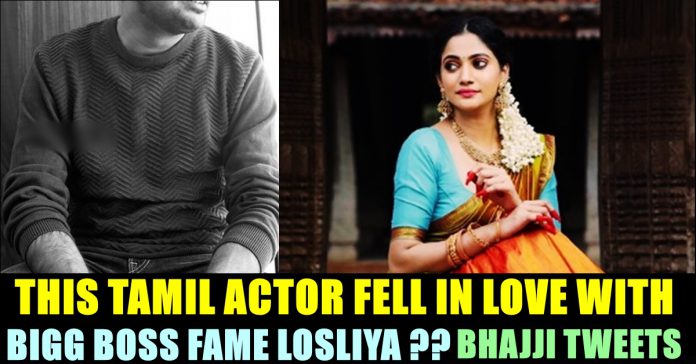 Entire cricket fraternity came forward and wished former Indian off spinner Harbhajan singh after he shared the teaser of his next film “Friendship”. The 118 second long teaser which has the former CSK spinner and Bigg Boss sensation Losliya in the lead roles, was released three languages. “Sharp, Crisp, Intense #FriendShipMovieTeaser of my Movie is Here.Enjoy it,Guys!” Harbhajan singh wrote in his tweet while sharing the tweet.

The teaser showed Harbhajan Singh, Losliya, Sathish in the lead roles. Many celebrities from cricket fraternity came up with tweets wishing their colleague. As we all know, Harbhajan Singh is a veteran Indian off spinner since early 2000s. Playing for team India for several years, Harbhajan recently impressed fans with his performance for Chennai Super Kings team in IPL tournament. Not only his on field performance but also his lovable Tamil tweets gained him vast number of tamil audience.

Be it win or defeat, after every Chennai Super Kings match, a Tamil tweet filled with mass dialogues from tamil films would surface in the official twitter account of Harbhajan Singh. Tamil poetries such as Thirukural also took place in Harbhajan’s tweets which was loved by the people of Tamilnadu who started to call him as “Thirubajan Singh”.

In the film “Friendship” which has action king Arjun, Bigg Boss sensation Losliya played the female lead. She who gained a separate fan base through her Bigg Boss stint, has been signing films since coming out of the house. On 20th of February, comedy actor Dhanush, uploaded a tweet in his twitter account expressing his love towards the Indian spinner.

Replying to this tweet of Sathish, Harbhajan singh, in a humorous manner said that Sathish is blatantly lying and said that he fell in love with Losliya. “Why are you blatantly lying like this ?? You are loving Losliya right ?? Do my sister in law know about it ??” wrote Harbhajan in his tweet and added a winking face with tongue out emoji to denote that it is just a friendly banter.

However, The reason behind Harbhajan’s surge in popularity is his frequent tweets in Tamil and the man who is scripting those tamil phrases is an engineer P. Saravanan from Chinnalapatti. The youth has been an ardent fan of Harbhajan ever since the off-spinner performed a hat trick in the epic Kolkata Test of 2001. As Saravanan stood as a strong defender on social media from those who trolled Harbhajan time and again, the cricketer was bowled over by the fan’s sincerity which gave him an opportunity to handle Harbhajan’s twitter account.