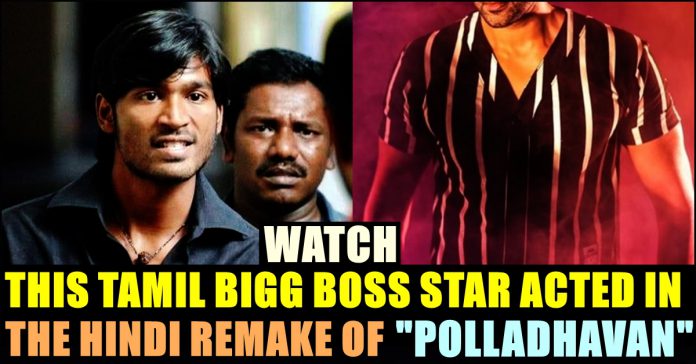 Polladhavan is a 2007 released trendsetting action film which brought the talented Vettri Maaran to Tamil film industry. The film which is loosely based on Italian cult classic Bicycle thieves, is the first and only Tamil film to revolves around a bike of the protagonist. However Vettri denied it and said that the film’s story was inspired partly by the lost bike of his friend Andrew and the variety of experiences he had tracking down his vehicle. Vetrimaaran revealed that when he wrote the script, he made many changes to suit the visual medium and for Dhanush on his physical attributes while playing an action hero. The performances of Dhanush, Kishore, Daniel Balaji were highly praised by the critics and by the audience during its release time.

Apart from the above mentioned names, the film had Divya Spandana, Karunas, Santhanam, Pawan, Sendrayan etc. The musical score was by G. V. Prakash Kumar, while Yogi B and Dhina composed each one song. Velraj was the director of cinematography, V. T. Vijayan was the editor, and Rambo Rajkumar was the stunt choreographer.

The films major success gained its makers several awards and was remade in Kannada language as “Punda” in Kannada, as Kurradu in Telugu, as Pravegeya in Sinhala and as Borbaad in Bengali. Now as the combination of Dhanush and Vettri Maaran is preparing for their 5th film, the film Polladhavan is still being remade Hindi as Guns of Banaras in Hindi.

The Hindi remake is slated for release on the 28th of this month. The trailer of the same has released and is trending in youtube, only to disappoint the fans of Tamil cinema who have watched the original version. To our surprise, the film is going to have Ganesh Venkatram who is known among Tamil audience for appearing in films like Abiyum Naanum, Unnai Pol Oruvan etc is going to do the role of Daniel Balaji. He became a popular face among Tamil TV audience after appearing in the season one of Bigg Boss show, hosted by Kamal Haasan.

The film is going to have Karan Nath in the lead role, replacing Dhanush. Watch the trailer of the film here :

Sharing the happiness of reprising the role of Daniel balaji, Ganesh Venkatram, in his official twitter account said that he is feeling extremely great to have acted in that role. “Transforming into someone else all together is both the most challenging & satisfying journey for an Actor ! Meet #VikramSingh from #GunsOfBanaras !” he wrote in his post.

Transforming into someone else all together is both the most challenging & satisfying journey for an Actor !

Comment your views on the trailer and Ganesh replacing Daniel Balaji !!