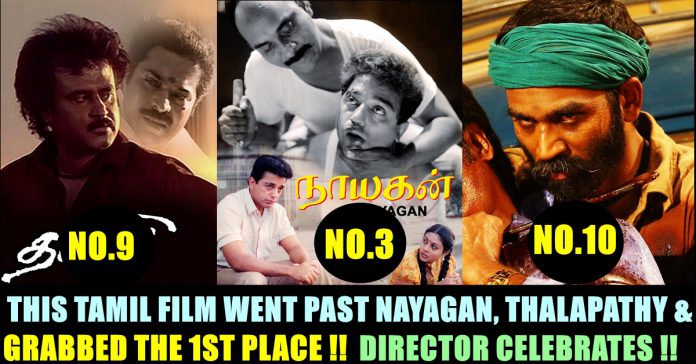 After seeing his film being ranked at the first place in IMDB among all the Tamil films that has ever been released, Director Ramkumar became extremely happy and shared the news through his official twitter account. Internet movie database is an online database related to films, television programs, home videos, video games, and streaming content online – including cast, production crew and personal biographies, plot summaries, trivia, ratings, and fan and critical reviews.

As of January 2020, IMDb has approximately 6.5 million titles (including episodes) and 10.4 million personalities in its database, as well as 83 million registered users. In this digital era, people mostly prefer watching movies only after considering the IMDB rating of the movie. Hollywood film Shawshank Redemption is remaining in the first place for years now in the top 250 IMDB film list worldwide.

Now, in the IMDB list named as Top rated Tamil movies, among all the films that has ever been released in Tamil film history, Director Ramkumar’s “Ratchasan” which was released in the year 2018 has grabbed the top place with 8.5 ratings. The list includes, Kamal Haasan’s epic gangster drama “Nayagan” in the third place and Rajinikanth’s “Thalapathy” in the ninth place.

Vettri Maaran’s recently released revenge drama “Asuran” and his novel based tragedy film “Visaranai” got the tenth and eighth place respectively. Debutante Premkumar’s romantic drama can be seen in seventh place. Films that portrays the caste dominance in the rural part of Tamil nadu such as Pariyerum Perumal and Devar Magan were rated in the fifth and sixth place respectively. Kamal Haasan’s Anbe Sivam grabbed the fourth spot and Pushkar-Gayathri’s cop-gangster flick “Vikram Vedha” is in second place.

The Vishnu Vishal starrer also rated as the third best film India wide in the IMBD site, followed by Satyajit Ray’s Pather panchali and Amol Palekar’s Golmol. These films are ranked by considering the votes casted by the registered users of IMBD website. After knowing about this feat his film achieved, Director Ramkumar who debuted through “Mundasupatti”, a period comedy film, expressed his happiness through twitter.

Ramkumar who is all set to direct actor Dhanush in his next, said that he approached almost 16 actors to play the lead in his “Ratchasan” movie. After getting refused by all of them, the filmmaker went with his first film’s hero Vishnu Vishal who accepted to do the role. After release, the film is being highly praised by audience for its intriguing screenplay and engaging content.

“Indru Netru Nalai” director Ravikumar, Cinematographer Vetri and many others wished the filmmaker for the achievement. Check out some of the reactions Ramkumar’s tweet received below :

Deserves to be so 👍🏼