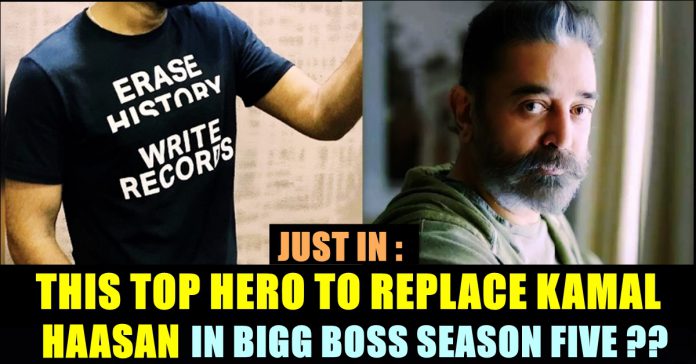 Bigg Boss season four became a huge hit with Aari Arjunan winning the title trophy by defeating his co-contestant Balaji Murugadoss in a large margin of votes. Due to COVID 19 pandemic, the fourth season which would usually take place between June and September, got inaugurated on 4th of October and ended on 17th January.

Soma shekar, Ramya Pandiyan, Gabriella Charlton, Rio Raj, Balaji Murugadoss and Aari Arjunan managed to enter the finals. While Gabriella Charlton left the finals midway by receiving Rs. 5 lakh cash money offered by Bigg Boss, Rio and Ramya Pandiyan became the second and third runner up respectively. Now, a report has surfaced saying that the channel management is in talks with a leading tamil actor to host the fifth season of the show which is expected is take place from June.

Actor turned Kamal Haasan is pretty much active in the electoral politics and is going to contest in the upcoming assembly elections as a Chief minister candidate. On behalf of his political party Makkal Needhi Maiam, he has selected candidates to contest in the constituencies of state Tamil nadu. It is also notable that the leader of the political party is going to contest in Coimbatore-south competing with BJP’s Vanathi Srinivasan and Congress’s Mayura Jayakumar.

If Kamal Haasan wins the poll by gaining more number of votes, he would have to serve as an MLA for the people of Coimbatore-South. He also have to look after the people who belong to the constituencies which was won by the candidates of “Makkal Needhi Maiam” after the election result.

Kamal Haasan is also having a number of films to be completed post election. Amidst such situation, a buzz has surfaced saying that Vijay TV is in talks with actor Simbu to host the upcoming Bigg Boss season. The actor who made a come back recently, is actively participating in the shooting of his films and even released a film named “Easwaran” after completing it in a very short span of time. He who collaborated with Vijay TV by judging “JODI NO.1” in the past, also appeared as a guest for a number of shows. Now, it has been reported that the actor is likely to host the season which is going to have 15 TV/modelling stars as contestants.

Vijay TV is in talks with #Simbu to host #Biggbosstamil5 🤞🏻#biggbosstamil

Various kind of reactions are surfacing in Internet as soon as the news surfaced. “It will be fun … contestants won’t give same respect which they were giving to Kamal. But there is 100% guarantee for fun..” said a fan whereas another one said “We will miss Kamal Haasan sir but still Simbu will be an awesome choice , would be the best compared to salman khan. Super excited”

We will miss @ikamalhaasan sir but still Simbu will be an awesome choice , would be the best compared to salman khan. Super excited

It will be fun … contestants won't give same respect which they were giving to Kamal. But there is 💯 percent guarantee for fun..

What KH brings to the table will never be replaced by anyone..!

His Knowledge and his Legacy and Experience SPEAK FOR THEMSELVES

Anyone can host the show,Bur KH void strike them with both entertainment wise and garnering viewership

So i hope it's just a backup plan.

However, we have wait till the official announcement from the channel management regarding the replacement of Kamal Haasan. Comment your views on Simbu hosting Bigg Boss season 5 !!