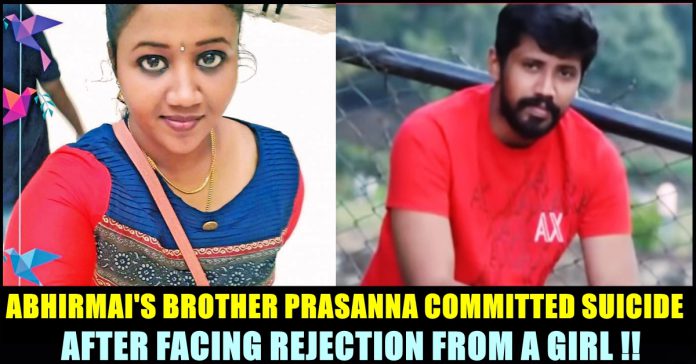 Murder accused Abhirami who is popularly known as “Tik Tok” Abhirami became the cause of the death of her brother who got rejected by his love interest and her family. The report surfaced after the 28 year old youth named Prasanna killed himself by hanging. The news created shockwaves among the public who are praying for the soul of Prasanna to rest in peace. Many believed that he doesn’t deserve such end as he looks innocent. People suggesting Police officials to keep an eye on the parents of Abhirami and Prasanna could also be seen in Internet.

During September 2018, a special team of Police nabbed a 25 year old woman named Abhirami who killed her two children in order live with her love affair. She who lived in Kundrathur, reportedly poisoned her two children who are aged 4 and 7, before eloping with a man with whom she had a romantic relationship.

Abhirami’s husband Vijay who was an employee in a private bank, found his son and daughter dead only after returning from home on the next day. He immediately informed the Kundrathur Police regarding the same. Investigations revealed that Abhirami had an extra marital affair with a man named Sundharam whom she met at a Biriyani restaurant.

Police officers revealed that the plan was to kill Vijay and two children and the former escaped as he didn’t return to home at the usual time. After poisoning, the woman also suffocated the children by closing their mouth and nose to kill them. She saw her husband and children as a hindrance to her marriage with Sundaram, said Police sources.

As soon as committing the crime, Abhirami left to Nagercoil, in order to execute her plan with Sundaram which is to settle in Kerala. However, Sundaram got arrested in Chennai. Without knowing that Sundaram got arrested, she called him through a Traffic Policeman’s cell phone. Police made Sundaram to convince her and come back to Chennai. She was nabbed at the Koyambedu bus terminus as soon as landing. The incident created huge outrage across the state with many blaming the accused for her inhumane act. Currently, Abhirami and Sundaram are lodged in Puzhal Jail and their case is expected to be heard next month.

Now, another shocking news involving Abhirami surfaced. It has been reported that her brother Prasanna committed suicide after getting rejected by a girl he loved and by her family members. Prasanna was living in an apartment near Mangadu with his parents. He was involved in a relationship with a girl who belongs to Permabur. Family members of the duo decided to get the couple married with each other.

Amidst the situation, family members of the bride came to know about the relationship between Prasanna and murder accused Abhirami. They immediately stopped the marriage arrangements, says reports. Followed by that, the girl also stopped contacting Prasanna which made him to take the extreme decision of ending his life. He hanged himself due to depression, according to reports.