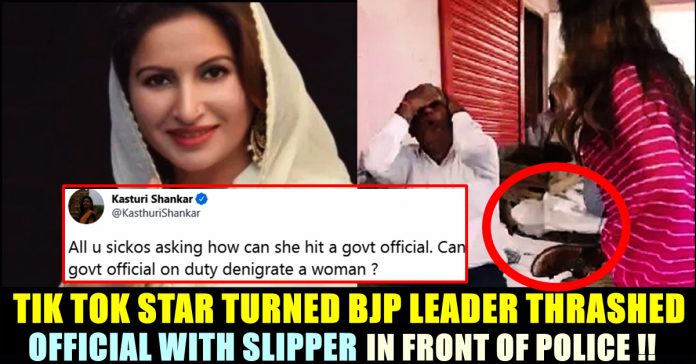 Sonali Phogat, a BJP leader who is also known for her Tik Tok videos grabbed the headlines by thrashing an official with slipper in front of police officials. Tamil actress and social activist Kasthuri stretched her supportive hand to Sonali through her tweets. The entire incident was caught on camera and is being widely shared by the netizens.

The official she thrashed identified as Sultan Singh who is working as a secretary in Hisar market committee. The slapping and hitting incident happened on Friday in front of police personnel who remained as a mute spectator. Main cause for this furore is the heated argument Sonali Phogat had with Sultan after farmers alleged that the secretary is creating hurdles in the procurement process.

In the video, Sonali can be heard saying, “How dare you abuse me ?” when she was hitting the officer. While interacting with reporters in Hisar, Sonali said that she thrashed the market committee official after he made derogatory remarks against her when she entered the Balsamand mandi. It is notable that Sonali had contested the 2019 assembly elections from Adampur and lost to Congress’s Kuldeep Bishnoi.

“ I visited Balsamand mandi along with a few farmers and the Hisar market committee secretary Sultan Singh to inspect the arrangements for starting gram procurement there. Sultan told me that I am a charming lady and I should not be roaming in the mandis for farmers. I tried to control my anger but his words pinched me so I thrashed him. He sought unconditional apology from me. Now, I have filed a complaint against Sultan Singh,” Sonali Phogat said.

Joginder Sharma, deputy commissioner of Hisar said that he received complaints from both Sonali Phogat and Sulthan Singh. “We are verifying the facts. Strict action will be taken. Sonali Phogat has alleged that the official made derogatory remarks against her and tried to assault her,” Sharma said according to the reports.

BJP's Sonali Phogat is thrashing a guy with her sandal.

This is what BJP culture is.

P.S.: Why do I feel that she is aware of the camera?pic.twitter.com/m7GCg4vpVv

Sultan Singh, in his complaint to the police said that Sonali asked him when the procurement for gram will be started. “I told her Hafed officials are not ready to initiate procurement due to lack of arrangements at the mandi. A shed will be needed there for procurement to begin. After talking for 15 minutes, she started abusing me for not starting the procurement process. She even accused me of not helping her during the assembly election. When I told her that I belong to Narwana and have no connection with Adampur, she started thrashing me,” Sultan said in his complaint.

This incident created huge controversy on the online platforms. Tamil actress Kasthuri said that the fault is in Sultan Singh’s act which is why he is remaining calm while getting beaten by her with slipper. Check out her tweets below :

When Sultan singh abused Sonali Phogat, did police take immediate action? If she took legal route, she will be like me and all of us women still waiting for justice. Better now, she has punished him then and there, he can give police complaint and wait 5 years for verdict.