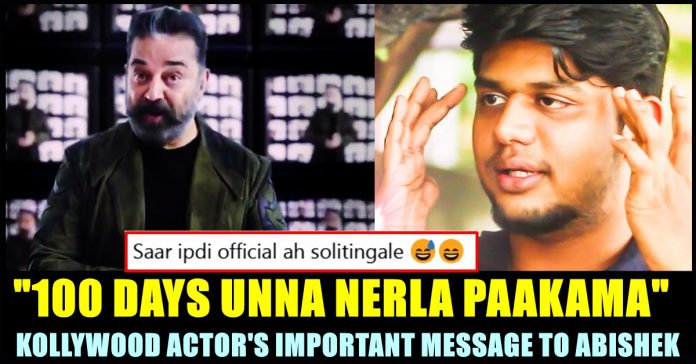 Prominent Kollywood director Venkat Prabhu came up with a tweet wishing popular movie reviewer Abishek Raaja for his birthday and also hinted about his Bigg Boss entry. The “Mankatha” maker who interacted with the film analyst through many shows and interviews, said that he is not going to see him in person for the next 100 days and wished him the best to do well in show. The tweet came in as a surprise to the users of Twitter as VP’s tweet officially confirmed Abishek’s participation in the Kamal Haasan hosting show.

On Sunday evening, Kamal Haasan is going to reveal the 14 plus celebrity contestants who are going to take part in the reality game show that requires them to stay inside the house and perform the tasks provided. Despite of the several names that are doing rounds, none of the celebrity’s participation has been officially confirmed. Now, through his tweet, director Venkat Prabhu officially confirmed Abishek’s participation and fans just can’t keep calm for the inaugural episode of the cash rich show’s fifth season.

Abishek Raaja who interviewed almost all the top celebrities of Kollywood, has a separate fan following for the way he reviews movies. He also acted in a film named “Imaikaa Nodigal” as a best friend of Raashi Khanna. With immense passion for cinema, Abishek has been reviewing movies for years. His 2 minute reviews in “Fully Filmy” is pretty much famous and he grabbed the limelight after roasting Raghava Lawrence’s “Motta Siva Ketta Siva” film.

He is currently reviewing movies in his own youtube channel “Open Panna” where he also interviews celebrities. He is actively analysing the movies of Kollywood through his youtube channel and has been giving updates about the same industry through his official twitter handle. His interviews with celebrities such as Gautham Vasudev Menon, KV Anand, Soori, Vimal and few others became a subject to severe online troll.

Many Twitter users including actor Shanthanu reacted to the tweet of Venkat Prabhu. Check out some of them below :

Season five of Kamal Haasan hosting Bigg Boss show is all set to stream from 3rd of October. Amidst the rumours that took place about the change of host in the upcoming season, Kamal appeared in a number of promos and kept a full stop to the baseless rumours. Now, speculations on the 15 celebrity contestants are going on in full swing with many naming several known celebrities as probable contestants.