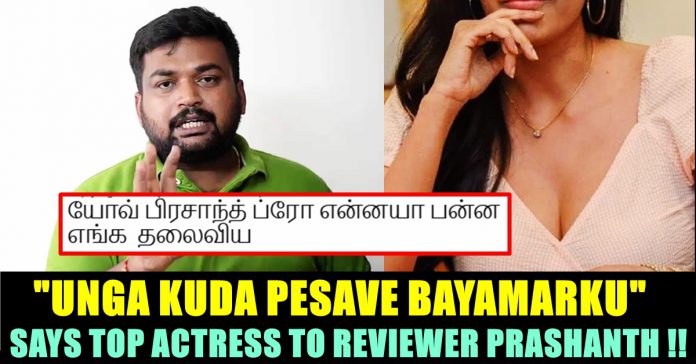 Priya Anand, one of the most talented actress in Tamil film industry rose to fame through films like Vamanan, Ethir Neechal is also considered as an experienced actress among very few. Unlike many heroines who faded away, Priya still sustains in the industry with her versatility in the movies she acts. The actress celebrating her 33rrd birthday today and twitter is pouring wishes on her to live long.

Reviewer Prashanth who seems to have a good friendship going on with the actress, wished her the best on her birthday. “Many More happy returns dear don @PriyaAnand !! Intha varsham mass panrom !! 😊😊😊 Wishing u the very best for everything to come ! வணங்கும் முருகன் அருள்வாராக !! ௐ !! 🎂💐” he wrote in his twitter timeline by uploading a picture of himself with the actress.

This reply from the actress surfaced because of an incident that took place few days ago. When Prashanth appreciated Priya Anand’s recent photoshoot in a funny way, the actress thanked him by calling him by his nickname “Panda” which was kept by Netizens.

This reply from Priya went viral and received more likes and retweets from the twitter users more than the original tweet posted by Prashanth. Since then, many twitter users kept trolling Prashanth regarding the reply of Priya.

Check out some of the reactions for their conversation :

Priya was born in Chennai, Tamil Nadu as the only child to a Tamil father named Bharadwaj and a half-Telugu, half-Marathi mother named Radha. The 32 year old actress was last seen in the hit movie LKG along with RJ Balaji. She is expected to be featured in Adhitya Varma, the remake of Telugu blockbuster Arjun Reddy. In the movie Priya Anand doing the role of a busy actress who falls in love with the protagonist.

What do you think on this reply from Priya Anand ?? Comment your views below !!