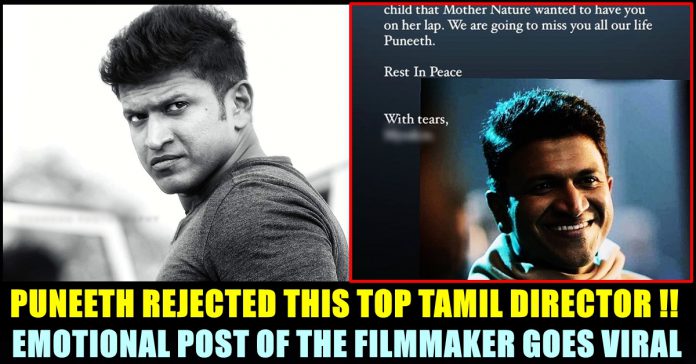 Not only Kannada film industry, the entire country shattered by the demise of actor Puneeth Rajkumar. From Kamal Haasan to Mahesh Babu, almost all the celebrities from south India paid their last respect to the 46 year old by uploading tweets in their respective twitter timeline. Mysskin, one of the prominent directors of Tamil cinema, released a note remembering the only meeting he had with the late actor and lauded him for the humble nature and kind gesture. The “Anjaathe” maker says that he went to Puneeth’s residence to narrate a script which, unfortunately, didn’t materialize. Mysskin pointed out why he rejected the project and how down to earth Puneeth is as a person.

On Friday, it has been officially announced that the actor passed away due to fatal cardiac arrest. Reports suggests that the actor was working out in his Gym when he suffered the sudden attack and was rushed to a hospital immediately. The actor was admitted to Vikram hospital and was monitored by the doctors in the intensive care unit, moments before the devastating news about his demise shattered the entire country. With Punith’s peers and closed one reaching the hospital premises, fans broke down emotionally and are still in denial.

Fondly called as “Appu” by his fans, Puneeth is a son of legendary actor of Rajkumar. He has acted as a hero in 29 films. Entering film industry as a child artist, he won national award for acting as a child in the film “Bettada Hoovu” in 1985. Among the thousands who remembered Puneeth, director Mysskin, in his note remembered about the day he narrated a script to the Kannada Superstar.

The filmmaker said that he went to Banglore and narrated a script to him. Though Puneeth loved it, it didn’t materialize and the reason behind Puneeth’s rejection was the big budget of the film. Mysskin remembered about how Puneeth came down to parking lot to see him off. They both parted with a vow on working on a project soon, according to the post of Mysskin.

“Devastated to hear Puneeth’s demise. Few years back he called me over the phone and discussed
about a project. I went to Banglore and narrated a script. He loved it. It didn’t materialise though. He was frank enough to say it was not possible because it was too big a budget. He was humble enough to come down upto his parking lot to see me off. We both hugged and parted. We took a vow that we
would work on a project soon” the filmmaker said in his post.

“Dear Puneeth, you are not just a movie hero. You are a REAL HERO. Your kindness, humbleness and truthfulness got thousands of friends and millions of fans. You were so pure a child that Mother Nature wanted to have you on her lap. We are going to miss you all our life, Puneeth” he added.