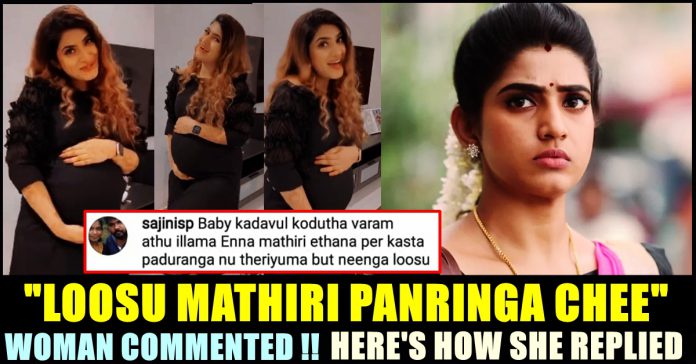 TV actress Sameera who is known for appearing in Vijay TV serials such as “Pagal Nilavu”, “Rekka Katti Parakkudhu Manasu” and others reacted to the negative comments that were surfaced in one of her recent Instagram reel videos. Many spewed hatred at the actress for performing reel videos during her pregnancy and advised her not to involve in such activities. Replying to them, Sameera said that she knows how to care for her child more than anybody else and suggested one of the commenters to stay positive.

Television actress Sameera Sherif recently announced about her pregnancy through her social media handles. She who got married to her “Pagal Nilavu” co-star Syed Anwar in the year 2019, announced that they are expecting a baby on 11th of April this year. She who is pretty much active in social media platforms, moved her legs for a song and uploaded it as a reel on her Instagram space. On seeing her video, many people came up with comments criticizing her for dancing while being pregnant.

Sameera replied back to many of them, countering their perspective about “pregnant women should stay mum”. Sameera Sheriff and Syed Anwar acted as a love couple in a serial of Vijay Television named “Pagal Nilavu”. They also took part in the reality game show named “Mr and Mrs Chinnathirai”. Sameera enjoys nearly 6 lakh followers for her Instagram account and nearly 3 lakh subscribers for her youtube channel. She who has been making vlogs based on her daily routines, also performs reel videos based on Tamil songs.

On Thursday, Sameera lip synced for “Thedi kattikka poren” song from “Irudhi Suttru” and uploaded it with a caption saying “Yen aasa romba paavam” and mentioned the outfit courtesy. Watch the video below :

With the wide reach the video garnered, it also received criticism from a number of her followers. A follower said that pregnancy is a blessing from God. “Without knowing how many of us are suffering without the blessing, you are behaving like a mentally challenged” she commented on Sameera’s post. Replying to her, the actress said “if u be positive, positive things will happen in your life. But if u keep commenting negative like this. Your life also will end up being -ve. It’s your choice to be what u want n how your life has to be.”

Another follower asked Sameera to stop doing such non sense. “Alhamdulillah of course this is my 1st pregnancy and what’s non sence on this ? You don’t like, don’t watch. I am not from the old school thinking” she replied.

Check out some of the other replies provided by Sameera to her followers :

Earlier, reacting to similar comments, Sameera uploaded a series of videos saying “I know a baby is growing inside the baby and I am the mother of the baby. Anybody in the world cannot do justice to my baby as much as I do. I know what is best for my baby and I know how to take care of my baby” and added that she will keep doing what she loves to do. “You are nobody to tell me or remind me that I have a baby. better grow up.” Sameera sherif further said.

"Pagal Nilavu" actress Sameera Sheriff gives back to trolls . . "I am the mother of the baby, I know what is the best for the baby" she replies to those who criticized her for dancing while being pregnant . . #Sameera #VijayTelevision #pregnant #Instareels pic.twitter.com/N4BQkgdAJV