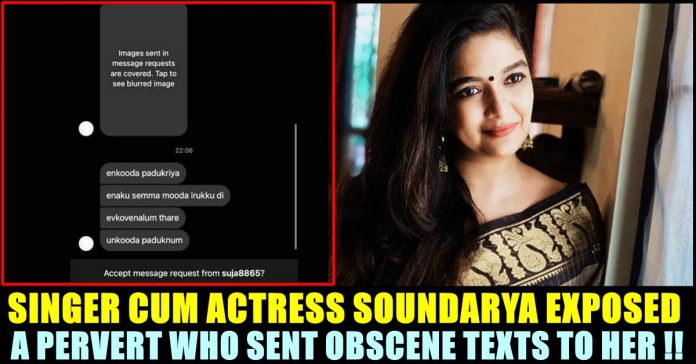 Television actress and singer Soundarya who is known for her stint in Vijay Television, exposed a pervert who sent inappropriate messages to her in Instagram. She alerted her fellow Instagram users and blocked the user and the accounts he might create in future. Female Instagram users and celebrities facing online harassment through the DMs of Instagram increased in high rate which is evident through the screen shots that are surfacing in Internet in a daily basis.

Soundarya Nandakumar is known for her appearance in Vijay Television’s reality shows and serials. She rose to fame through a recently released short film which was titled as “Yours Shamefully”. She began her Television career as Super Singer contestant and appeared in the serial Pagal Nilavu in Vijay TV. She played one of the leading role in that serial, in which she portrayed a character named as Revathy. She who appeared in Vijay’s “Master”, is one of the many TV actresses who are very much active in Instagram, particularly in posting stories.

Followed by this, Soundarya added another story thanking Instagram for adding the feature of blocking one person, along with the accounts he is going to create in future. “Best Feature Ever. Thank You Instagram” she wrote in her story.

Here’s the screen shot of her second story :

People in social media platforms such as Instagram, Twitter and Facebook often thinks that the things they are sharing in a private inbox of someone else is going to stay private forever. But they must realize that it would become public sooner than they think and would spread faster than they assume.

It is high time for online men to realize that discomforting women through social media platforms by sending them inappropriate texts won’t take them anywhere other than being named and shamed.