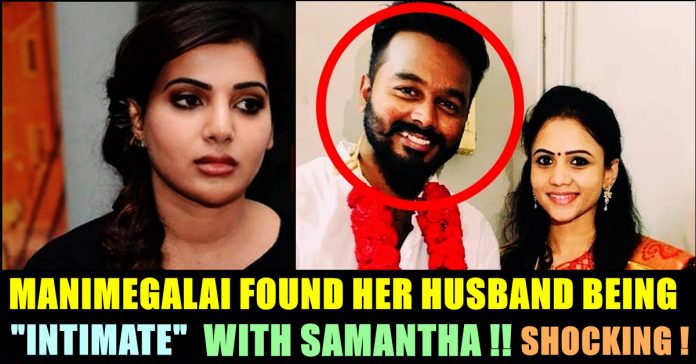 Popular VJ Manimegalai has got hitched to her boyfriend Hussain, on December 2007, after failing to convince her father for their love. Their marriage took place at register marriage as an immediate effect of Maniumegalai’s father’s reaction. However, the couple is leading a happy life since then and they are excelling in their respective field as well.

Manimegalai who saw Hussain in a song of Raghava Lawrence as a group dancer, impressed with his dance moves and traced him down with the help of her friends. Hussain, who is currently working as an assistant dance choreographer, worked along with Samantha and Ram Charan in the movie “Rangasthalam”.

A recent post of Manimegalai, shows her husband teaching Samantha her dance steps. The picture indeed has Hussain being very close to the “Kaththi” actress but as we know it is a part of the profession. Manimegalai who seems to have found the picture in her husband’s cell phone uploaded it in her Instagram account with a caption saying “Paaka Rendu perum en kannuku apdiye brother & Sister maariyae irukaanga 😏🚶‍♀️” (Both of them look like a perfect brother and sister) in a humorous way.

Followers of Manimegalai had other ideas as they trolled the anchor for getting jealous on the fact of her husband being intimate with Samantha. Check out few of their comments here :

Atlast, Hussain himself commented on the post by thanking all the “Morattu Singles” for supporting him in the comment section. Check how Manimegalai reacted to his comment below :

Check out the other post of Manimegalai regarding the same occasion :

Manimegalai, started her career as a television anchor in 2010. She hosted her first programme called Super Hits on Sun Music, 2010. She then hosted Franka Sollatta in Sun Music. She became a leading television anchor after hosting celebrity interviews and popular prime time shows on Sun TV, KTV, Sun News and Sun Music simultaneously.

She was compared to VJ Anjana of the same television and many speculated that she could be a younger sister of her as they are so much similar in looks. Manimegalai and Hussain participated in Vijay TV in Mr. and Mrs. Chinnathirai reality show and they won second runner up in the show.