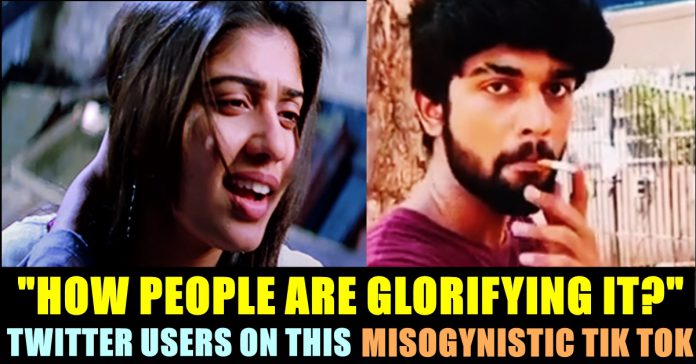 Followed by a twitter user who called out a random guy named as Sugi Vijay with highest number of followers in Tik Tok app for his “Misogynistic” tik tok video, many others started expressing their disagreement with a video he performed. In the tik tok video, we can see the guy smoking a real cigarette before delivering an alleged acting performance of hurting a girl by slapping her to show his dominance over her. The dialogue he enacts belongs to a movie named as “E” of Jeeva and Nayanthara and the Tik Tok user merged a background score from some other movie to make it look like it is “cool” to hit women in public while smoking.

It all started when a twitter user named as Divya Rajendran shared this particular Tik Tok video in her Twitter account wondering how people are glorifying such video instead of calling him out for his “Misogynistic” act. She said that people are going to think that it is completely “Okay” to behave like this if no one calls him out for performing such video.

The thing which worried her the most about the video is his caption where he wrote “Nammakitaye vaa” with laughing and fire emojis. The most surprising part about this whole tik tok process is how people received this video of him. Divya points out the only guy who called him out in the comment section and shows us all the other comments where his act was being glorified like he did something “progressive”.

The original Tik Tok audio which was created by him, instigated many other tik tok users to re-enact it which makes us realize that majority number of people are thinking that it is “cool” to make a Tik Tok video on hitting a woman or this guy with several number of followers made them to think that way. Many of them who used this audio to do Tik Tok are women is the saddest part.

“I feel so angry and how is that nobody felt angry ?? This is so bad, This is so wrong. Nobody calling him out. What are they ? Are they the “Heroes”? How is this right ??” asks Divya in frustration while sharing the video in Twitter.

“Urgh! If we don’t call these people out, people are going to think that it is completely okay to behave like this!!” Divya wrote as her caption. Here’s her post :

This is the second half, how is it that they don’t realize that this is wrong? pic.twitter.com/uaBEgtZOYR

She further exposed how Sugi reacted to a guy who confronted him for making such video.

When somebody called him out, this is how he replied! I’m not even kidding, this guy thinks it’s a joke! pic.twitter.com/Hy874tNxaH

This kind of mentality is being imposed by the actors of Tamil cinema on the youngsters of the state is an undeniable fact. Right from Rajinikanth slapping Vijayashanti in “Mannan” to Vikram slapping Keerthy Suresh in “Saamy 2”, we have witnessed many scenes where the protagonist would slap a woman to teach her right lessons and sometimes for no appropriate reason.

This tweet of Divya received several reactions from the users of twitter. Check out some of the below :

Tik tok shaming isn't classist. Toxic content has to be called out. Period.

And it so happens we find a lot of toxic content on this particular platform. https://t.co/6IXBm8ej1d

One thing she said sums up the entire issue with #sexism.

"I felt so angry. How is it that nobody else felt angry?"@TikTok_IN, maybe have a look? https://t.co/RhMiARcOer

people like him will never change till they get cheering comments for their cheap trash contents. we should all load those people's comment session with shame. then only they'll feel guilty.

@chennaipolice_ please see this . The man is glorifying violence.

Comment your views on these kind of Tik Tok videos being made and getting glorified !!