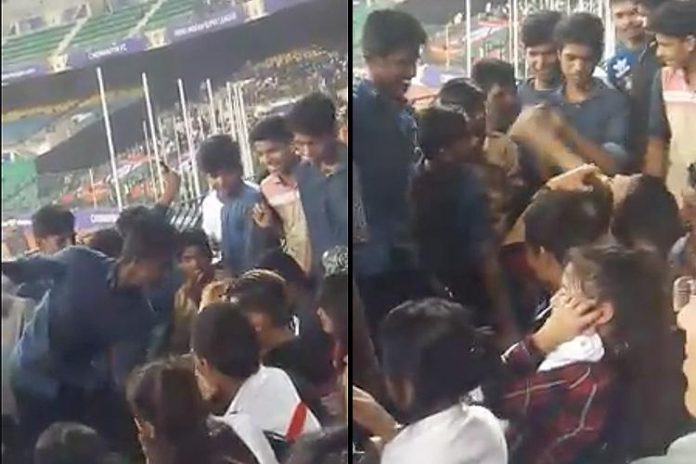 A video of a group of men, harassing three North-East Women, in the Nehru outdoor Stadium, during the Indian Super League, in the match between Chennayin FC and NorthEast United FC, went viral on various Social media platforms. The act of the group of the young men were severely opposed by various sources.

The main accused was identified as Tamilchelvan, who is a painter. Along with him, another accused has also been arrested by the Periyamet Police.

In the video, it is clearly seen that the accused is dancing infront of the North- Eastern fans, who have come to the match. The accused’s body language is so obvious that he is harassing three women who were seated among the crowd.

Along with Tamilchelvan,  the other one arrested by Chennai police is Karthik, an engineering student at a college in Avadi. Karthik too was seen in the video, amused and encouraging Tamilchelvan’s dance. The two have been remanded to 15 days in judicial custody.

“After the video went viral, we had put out a notice asking if anyone could identify who these men were. We also traced the young woman in the video. She gave a statement that they were harassing her. Once we had her statement, we mobilized our search. The two were arrested on Sunday afternoon,” a police officer at the Periamet station told TNM.

Condemning the incident, actor John Abraham, owner of the NorthEast United team had said that it was deeply disturbing.

Chennayin FC also condemned the incident and said that they have a strong policy against racism. They further said that they are looking into such incidents and promised of taking strong actions against it.

The policemen said that they have checked the CCTV footage and traced the accused with the help of the details provided by them while purchasing the tickets.