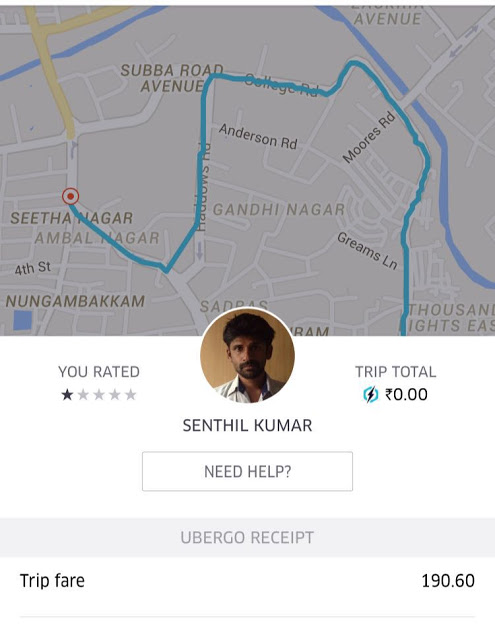 With all the fast moving scenario at our city and on-the-go lifestyle of people, the majority of us depend on the service of cabs. In cases when these cabs fail to provide us with safety and security, we start to wonder if we can really rely on these cab services. And the worst, or should I say, the most careless service seems to be by UBER.
One such incident took place on 4th of July. A lady had booked an Uber cab in the evening to go home. The driver was rash in driving, and when there was heavy traffic at Nungambakkam, he forcefully left the passenger on the road and left. What was even worse was, the Uber customer care didn’t take any necessary steps.
Around 6pm Vijayalakshmi Daya booked an Uber cab from Greams Road to her home. The cab booked for her was an Etios. The driver’s name was Senthil Kumar. When they reached the Nungambakkam junction, there was heavy traffic which is usual every day. She claims that the driver drove rashly and stopped at a point. He was highly agitated, told her he can’t drive any further and told her to get down immediately.
He has told that he was getting severe back and shoulder pain and hence he can’t drive. Vijayalakshmi was very polite and asked him why did he accept that ride in the first place if he was suffering from pain. Nungambakkam junction being a one-way she was sceptical if she will get another cab there and told him to at least leave her near Chetpet as she can book another cab, to which he bluntly refused.
He repeatedly kept saying that if she wants him to drive any further, both of them will die. He was very irritated and had no courtesy whatsoever in talking to a customer. The argument heated up and when she said she will call the police, he coolly said that she can call anyone but he isn’t going to budge for all that. As Uber has only e-mail sent to the customer, he was rude enough to say that she can’t do anything about this.
Vijayalakshmi then pressed the emergency option in Uber as the driver was becoming more aggressive. She got a call from them and she explained the whole scenario. The concerned person then spoke to the driver, but he was telling them the same thing that he can’t drive anymore.
Finally, he accepted to wait until she gets another cab to the customer service people on the call, but the moment the call ended he told the lady to get down from the car. When she asked him to wait until she gets another cab, he became violent and started shaking the car.
What was even more shocking to her was that, people outside didn’t bother to even ask what was happening. No one stopped to enquire all this chaos. After all this, Uber just sent her an apology text and refunded her fare amount.
She started tweeting this issues, keeping the ministry in loop. After a while she got a call from a Hyderabad number, supposedly to be their customer care. Someone called Swetha spoke to her and tried to resolve the issue. But Vijayalakshmi was adamant about taking the issue to the next level. Right after the call, she received an e-mail stating that the problem has been resolved and thanks for co-operating.
All her woe is, with the city being unsafe, people not bothering to offer help, having psycho drivers like these, how can a cab service not have a proper customer service for their customers. How much can people actually rely on Uber service, with no proper customer care?
This is not the only incident or the first one with Uber. Just a few months back, another friend, Gautham  was travelling from his house to CMBT bus terminus in an Uber cab. While he was getting down, he forgot his mobile – One Plus One in the cab. Unfortunately, he realised his phone is missing only after a while. By the time he noticed and called the driver’s number, he denied that there’s no phone in his car.
Gautham tried to submit a complaint to the police who simply said it is hard to trace this and nothing can be done. When he went to the Uber office to place a complaint, they were not showing any signs of helping him. Feeling frustrated with their service, he walked out.
If this is how Uber treats their customers, with absolutely no care, very poor customer service, no phone numbers to contact during an emergency, we highly doubt if they should be still working in the city!