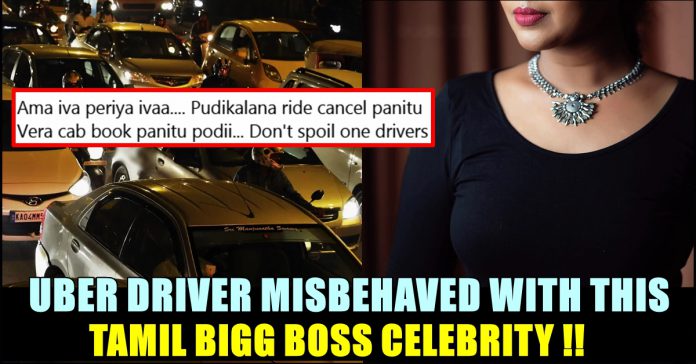 People who belong to cinema industry also using cab services of private companies such as Ola and Uber. We have came across many issues faced by women due to the drivers of these companies. Now to our shock, a popular actress and the title winner of Kamal Haasan hosting Bigg Boss show, Riythvika has became the victim of Uber service.

In her recent twitter post, Riythvika has reported that a driver of Uber behaved very rude to her. She even posted the picture of him with his name and his car number. Her caption for the post read as “Very unsafe journey in Uber @Uber driver is so so rude & the car condition is worst, terrible. Tata indica TN07AR4798 UBER”

To her post Uber service’s official handle replied by asking her to send the details as direct message :

Hey Riythvika, this is concerning. Kindly share the registered details via Direct Message. We will follow up. https://t.co/1WqzzOmdKe

Riythvika who debuted in Pa. Ranjith’s much appreciated Madras movies, went on to participate in the second season of Vijay Tv’s Bigg Boss show in which she won the title as winner. After that she is now ready for her next release which was titled as “Irandam Ulagaporin Kadaisi Gundu”. Being studied in Teynampet SIET college, Riythvika is one of the very few Tamilnadu based heroines in Tamil film industry.

Here’s some of the reactions she is receiving for her complaint :

He will be punished very soon Mam. Don't worry

On the work front Riythvika is currently working on projects including Odavum Mudiyathu Oliyavum Mudiyathu, and an untitled biopic of actor-politician MGR, where she essays the role of Janaki Ramachandran. For the latter role, Riythvika carefully studied the habits and behaviour of Janaki, including by watching her old films.

What do you think on this complaint made by the actress ?? Comment your views !!