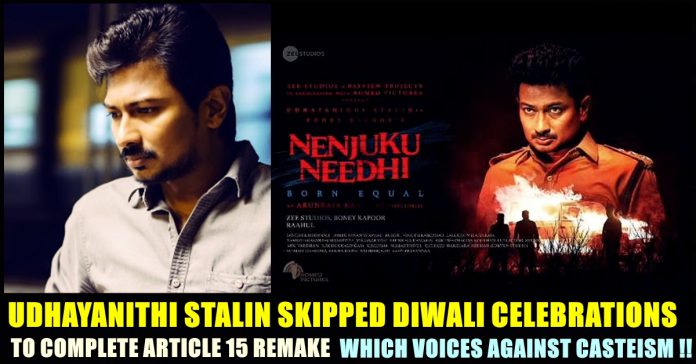 Chepauk-Thiruvallikeni MLA Udhayanithi Stalin who introduced a robotic sewer cleaner in his constituency for the first time in state Tamil nadu, is busy shooting for the remake of Bollywood blockbuster Article 15 amidst the Diwali festive season. The Ayushman Khuranna-starrer which received both commercial success and critical acclaim during its release time, voiced against discrimination related to race and caste.

The Tamil version of the 2019 released film is being with the title “Nenjukku Needhi”. Arunraja Kumararaja of “Kanaa” fame roped in to direct the film with Udhayanithi Stalin playing the lead. Now, a report surfaced saying that the actor who’s serving as MLA for Chepauk-Thiruvellikeni constituency, is busy shooting for the film at a deep forest in Pollachi, irrespective of the Diwali festive season.

After entering Tamil film industry as a film producer and distributor with his production studio Red Giant Movies, Udhay made films such as Kuruvi, Aadhavan, Manmadan Ambu etc. In the year 2012, he made his debut as an actor through the romantic comedy Oru Kal Oru Kannadi directed by Rajesh. His first ever non-romcom “Manithan” released in the year 2016 and got recognised well by the audience. After that, Udhay acted in the films of acclaimed filmmakers such as Priyadharshan, Seenu Ramasamy and Mysskin.

Udhayanithi Stalin made his electoral debut by contesting in the Tamil Nadu Legislative Assembly Election 2021 as an MLA candidate for the Chepauk-Thiruvallikeni constituency and won the election quite comfortably by secured 65,000 plus votes. As soon as becoming an MLA, Udhay introduced a robotic sewer cleaner in his constituency for the first time in the state.

Now, a recent report surfaced saying that the actor skipped celebrating Diwali festival with his family and is busy shooting for his upcoming film “Nenjukku Needhi” at a deep forest in Pollachi district. The Arunraja Kamaraja directorial is a remake of “Article 15” which raised voice against the discrimination related to race and caste. The Hindi film was made based on the gruesome Badaun rapes that took place in Uttar Pradesh.

Reports suggests Aari Arjunan of Bigg Boss season 4 fame and Tanya Ravichandran are playing pivotal roles in the Tamil version of the film which is expected to release in 2 months. Boney Kapoor who bagged the Tamil remake rights of Article 15, is producing the film under his own banner.