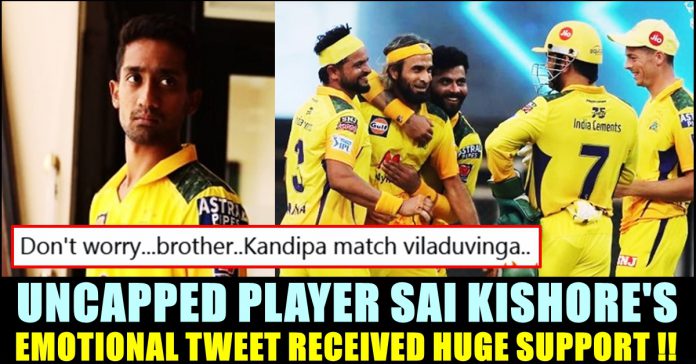 Team Chennai Super Kings is currently doing well in the ongoing IPL tournament with four wins with significant margins which helped them increase the net run rate to grab the top spot in the points table. It would help them to enter the play offs during the end of the league stage.

The team has hardly shuffled players and didn’t experiment any major changes in the playing 11 comparing to last season. Now, a tweet from an uncapped player named Sai Kishore has grabbed the attention of the fans who referred to a popular Tamil quote denoting that one shouldn’t expect reward for serving his/her duty.

The Tamil nadu based youngster looks promising but didn’t get an opportunity to make his debut for the Dhoni-led team yet despite sitting in bench for a whole season. Uncapped players Jagadeeshan, Ruturaj Gaikwad, Monu Singh got an opportunity to play under Dhoni in the 2020 edition of IPL after the team losing its chances to enter play offs.

Now, while the team is successfully topping the table with 8 points and positive run rate after 5 matches, Tamil nadu based Sai Kishore came up with a tweet writing “Kadamaiyai sei, Palanai edhir paarkadhe!” which is roughly translated as “Do your duty, don’t expect reward”

The tweet garnered wide attention in no time with several number of fans advising him not to worry. Fans even involved in verbal spat arguing whom should be removed from the team to make Sai play. When a fan said that Sai Kishore could replace Thakur, another one countered him with a reply tweet saying that he gave CSK the break by picking Padikkal’s wicket in the match against RCB.

“Boss, you could have requested release from CSK and joined any other team except DC, where Axar plays.. Game time is important and career of a sportsperson is short” a fan advised whereas many others boosted his confidence by asking him not to worry.

Check out some of the reply tweets below :

Boss, you could have requested release from CSK and joined any other team except DC, where Axar plays.. Game time is important and career of a sportsperson is short

Dont worry bro , upcoming season la kandipa u are the future. Get all the knowledge u need now. Next season namma dan ✨