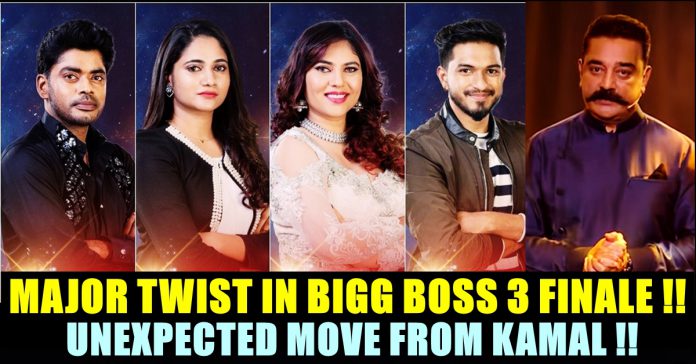 Bigg Boss Tamil 3 is almost about to end in a few days but before it does, the contestants are making the most of their days in the house. Bigg Boss show is keeping netizens busy in daily basis with three promos and a show streaming time for 1 hour per day. Many incidents that are taking place inside the house becomes the subject of debate in social media platforms.

The show which started with 17 contestants is now having 4 of them as finalists. Many twist and turns took place throughout the game show and yesterday, the contestants are made to cherish the unforgettable moments.

Now to our surprise, unlike other weekend episodes where Kamal Haasan would participate in shoot for only a day, this finals is going to be shot for two back to back days by having Kamal Haasan that is today and tomorrow to prevent the leak. The news about the evicted contestant would get leaked a day before it gets telecasted usually. News on the finals getting telecasted on Live is also surfaced and we have to wait till the official confirmation.

In today’s episode, Kamal Haasan is going to interact with the finalists and other contestants and in Tomorrow’s episode, he is going to announce the winner of the grand show. The actor is also expected to give an update on his upcoming projects Indian 2 and Thalaivan Irukkindran.

However, some fans are disappointed on the news of the show is not going to be telecasted in live :

Oh it isn’t live? What a shame! They’ll do all mullamaari thanam and edit to suit their agenda then!

Unlike other Bigg Boss seasons, this third has faced controversy after controversy. It is notable that Meera Mithun and Vanitha Vijayakumar has investigated by Police inside the Bigg Boss house. Along with that Saravanan’s immediate termination, suicide attempt of Madhumitha, physical harassment allegation on Cheran, this season has grabbed headlines almost everyday since the start.

As far as the Bigg Boss finals is concerned, there is a tough competition between the four finalists. Majority of people are raising their voice for Mugen and equal number of fans are voting for Losliya which is evident in the feeds of social media platforms. Sandy also has every reason to win the title as he gained a separate fan following. Sherin beating Tharshan in numbers in the previous week is a shocker which could happen in finale as well.

Whom do you think will be the winner ?? Comment your views.