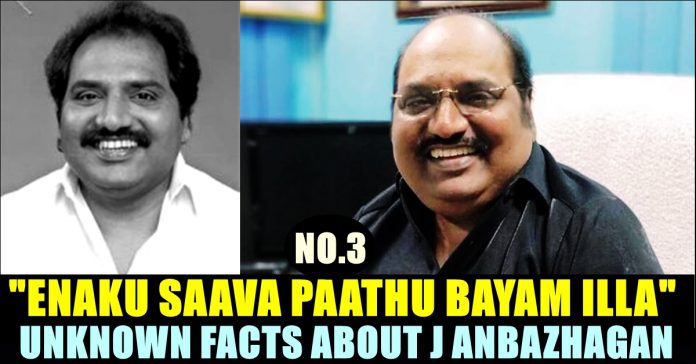 J Anbazhagan who was fighting against the COVID 19 for past few days, died at the age of 62 in a Chennai hospital in the morning of 10th June. Anbazhagan, a DMK MLA, was admitted to hospital on June 2 over “severe acute respiratory distress” and had tested positive for COVID-19 at the time.

He was put on ventilator support on June 3 when his breathing trouble worsened. He was fighting acute pneumonia and his condition deteriorated on Monday evening, according to Dr Rela Institute and Medical Centre, where he was being treated.

His cardiac function dropped and a chronic kidney disease also contributed to his critical condition.In a statement today, the private hospital said: “The COVID 19 pneumonia rapidly deteriorated early this morning. In spite of full medical support including mechanical ventilation at our COVID facility he succumbed to his illness.”

Anbazhagan became the first big political leader of Tamilnadu to die of Coronavirus. Many influential personalities including Chief minister Edappadi Pazhaniswami expressing their condolences for the demise of the politician. At this time, let us look back at some of the rare facts about the man who spent most of his lifetime as a politician.

Anbazhagan Died On His Birthday :

J Anbazhagan would have turned 62 today if he was alive as he was born on 10 of June in 1958. This fact left many people in utter shock. Film director Thiru wrote “Can’t believe d fact that J.Anbazhagan sir is no more.. He was so active to help people during this pandemic.. today is his birthday as well. Life is unpredictable!! RIP” to let his emotions out.

Can’t believe d fact that J.Anbazhagan sir is no more.. He was so active to help people during this pandemic.. today is his birthday as well. Life is unpredictable!! RIP

Despite of spending most of his lifetime as politician, J Anbazhagan also attempted movie producing stint. He produced “Aadhi Bhagavan” of Jayam Ravi which was released in the year 2013. In the same year, Anbazhagan distributed a film named as “Yaaruda Mahesh” which had actor Sundeep Kishan in the lead role.

In one of his political party meeting, Anbazhagan talked about how he sees death. “I don’t have feat at all. I am not involved in politics with fear. I entered DMK with “Vaikarisi” (a hindu ritual done in Tamilnadu after death) in my mouth. I don’t know what fear actually means.” he said in his speech video of which is trending now in social media platforms.

Anbazhagan graduated from DB Jain college, Madras University in 1980. He is survived by his wife and two children.

J Anbazhagan is more of a fan of actor Vijay which is evident through his old tweets. When actor Vijay was struggling to release his 2013 film “Thalaivaa”, J Anbazhagan stretched his supportive hand and said that his production house “Anbu Pictures” was ready release the film.

J Anbazhagan’s last tweet was to wish to his leader Kalaignar Karunanithi on his birthday. He posted a tweet on 2nd of June and it is the same day he got admitted in hospital for showing symptoms of COVID 19.

During this pandemic situation, Anbazhagan was actively involved in doing service for the people on his constitution. Representing the Chepauk-Triplicane Assembly constituency, he actively took part in relief work during the lockdown period. Now, his demise due to C0VID 19, has made his fellow party members and workers to be more cautious than before.

Late DMK MLA #JAnbazhagan did lot of public welfare work, during the #lockdown helping the poor and needy..

While trying to help others, he got infected by #Corona

Sad.. One of the risks of being out there..

Govt Officials, Political Leaders and NGOs have to be cautious.. pic.twitter.com/BxhqJKQjiA

J Anbazhagan went through a liver transplant surgery in London 25 years ago and it is highly believed that it made his health challenging. Sources revealed that Anbazhagan had other health complications related to liver and Kidney.

The DMK politician’s father Jayaraman was also a DMK worker. “Anbazhagan did more than what his father had done for the party” said Stalin few days ago. Few days ago, Stalin recalled how Jayaraman took part in protests during emergency and got arrested under MISA act.

Let us pray for the politician’s soul to rest in peace !!