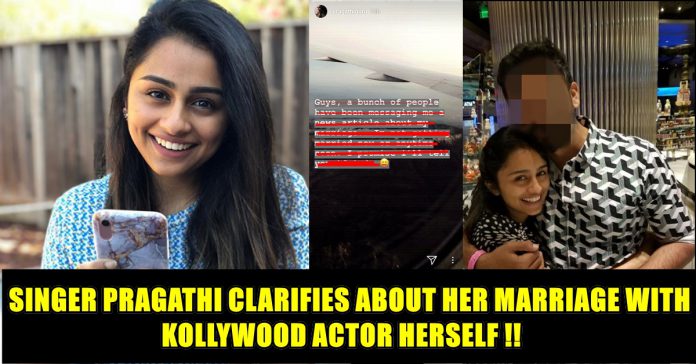 Pragathi Guruprasad is a playback singer who has worked on Tamil language films. Brought up in Fremont, California, she finished as a runner-up in the third season of the reality-based singing competition Airtel Super Singer Junior in 2012. She has since worked on the soundtracks of film albums composed by Anirudh Ravichander and G.V. Prakash Kumar. Earlier in our article as per tamil trend news website we reported that the emerging playback singer is soon to tie knot with the Kollywood young actor Ashok selvan. The “Thegidi” & “Soodhu Kavvum” fame Ashok Selvan. Actor Ashok Selvan is busy working in his upcoming films and this news made a big shock among his surroundings such as friends of tamil film industry and also his relatives. Ashok Selvan currently working on films like Nenjamellam Kaadhal and Pirai Theadiya Naatkal which are soon to hit the silver screen. As per the tamil news website “Tamil trend news” it is reported that Pragathi is offered to sing songs in films as per Ashok Selvan’s recommendation. The photos of both are virally spreading in social media and the online users are widely spreading the news about Ashok Selvan and Pragathi’s love marriage which is yet to be confirmed by the couple themselves. Now the singer has updated something in her instagram status regarding this. She said “Guys bunch of people have been messaging me a news article about my marriage . . Im not getting married now or anytime soon. I promise i’ll tell you if i do”. She updated it with a Face With Stuck-Out Tongue & Tightly Closed Eyes emoji. Check out the status below, What’s Your View On Pragathi’s Statement ??