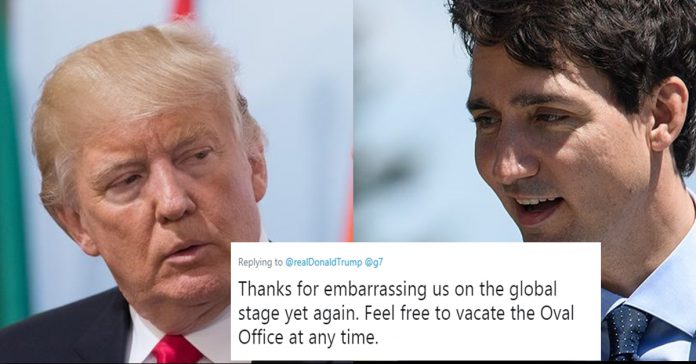 The diplomatic world was left gobsmacked this weekend after US President Donald Trump caused havoc at the annual G7 summit in Canada before jetting off halfway across the world to Singapore to meet North Korean leader Kim Jong-un with nothing more than a “getting-to-know-each-other” agenda for now.

In scenes, remarks, and tweets that are unprecedented in the staid and circumspect diplomatic world, Trump brought the US-led alliance of advanced economies close to a rupture, refusing to sign a joint communique with the group and insulting his host by calling him a “dishonest liar” — all over the contentious issue of trade tariffs on which he feels the US has been stiffed. Even India was drawn into the fracas, with Trump insisting his gripe on tariffs was not restricted to the advanced economies alone.

“This isn’t just G7. I mean, we have India, where some of the tariffs are 100 per cent. A hundred per cent. And we charge nothing. We can’t do that. And so we are talking to many countries. We’re talking to all countries. And it’s going to stop. Or we’ll stop trading with them. And that’s a very profitable answer, if we have to do it,” Trump said in a bewildering press conference before he departed Canada, insisting that the summit was a success and the level of relationship he shared with the G7 leaders was a10 on a scale of one to ten. But the moment he left for the airport, he let the tweets rip his host. “PM Justin Trudeau of Canada acted so meek and mild during our @G7 meetings only to give a news conference after I left saying that, “US Tariffs were kind of insulting” and he “will not be pushed around.” Very dishonest & weak. Our Tariffs are in response to his of 270% on dairy!” Trump tweeted.

PM Justin Trudeau of Canada acted so meek and mild during our @G7 meetings only to give a news conference after I left saying that, “US Tariffs were kind of insulting” and he “will not be pushed around.” Very dishonest & weak. Our Tariffs are in response to his of 270% on dairy!

He are some of the top comments :

Being diplomatic is not being “mild nor weak” you idiotic buffoon .You are a coward, you waited until you were on your plane to tweet insults to My Country & My Prime Minister. As a Canadian Fuck You,You Lying Spineless Coward!

Please don’t take this out on us. Most of USA can’t stand our president and are constantly ashamed of him. I apologize for out weak president @realDonaldTrump who has penis envy He is 10000 x more attractive than you and that must upset you very much.

Please take him. We will gladly trade Trudeau for the Commander of Cheese.

Thanks for embarrassing us on the global stage yet again. Feel free to vacate the Oval Office at any time.

@JustinTrudeau has only made you look meek Spanky. He is also taller, better looking, younger, more respected, better educated, (speaks multiple languages-including a better grasp of English) and way more credible than you! #sad pic.twitter.com/Hdb7SKb6Kg

You’re dangerous for this world. You don’t even get it. What are you doing? Do you not see the basics here? Are you on the spectrum?

It was you, Mr. Trump, that made a clown out of yourself at the G7. Our trading partners are organizing without us. How are you going to explain that when the job losses start, oh great deal maker? Hopefully the US won’t suffer same fate as your casinos, the University…