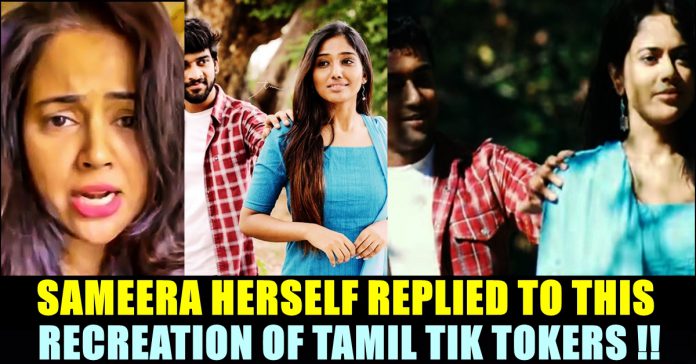 Fans trying to recreate their favourite songs, scenes, sequences became popular since the emergence of micro video posting app Dubsmash. The app got evolved as musically and became a widely used one after it got transformed as Tik Tok. However, Indian government has banned 59 chinese mobile applications, including Tik Tok to combat the threat posted by these applications to the country’s “sovereignty and security”.

The app’s ban doesn’t stop the creators from recreating their favourite movie moments. Many Tik Tok users who had millions of followers started migrating to other social media platforms such as Instagram, Facebook etc. New India based applications with similar features of Tik Tok also surfaced to attract youngsters.

Now, a popular Tik Toker named as Deepika has recreated a frame from the iconic Gautham menon directorial “Varanam Aayiram”. She who identifies herself as a “Kollymaniac”, said that the pair Surya and Meghna are close to her heart. She chose a particular frame from the chartbuster “Nenjukkul Peithum Maamazhai” and recreated it by wearing similar clothes of Suriya and Sameera Reddy.

Hello guys! Presenting to you the season 1 of #doubledhamaka!! 🤩 We, the KOLLYMANIACS are here to recreate our favorite Kollywood iconic movies. Styling Recreation is very common but this is a recreation with some real spice added. Right from the location, to the tone and the dressing, everything has been taken care of to our best. ✨ So when Deepu has taken her hands on recreation, what do you think would have crossed her mind the next second? If you’ve been following Deepu for quite a long time, you already have the answer! ❤️ Obviously. The classy Vaaranam Aayiram and Surya-Meghna who is always close to our hearts. ✨ And the line goes “Nee soodum poovellam Oru podhum udhiradhae.. Kaadhal enai Ketka villai.. Ketkathadhu kaadhal illai” OMG! Isn’t the video already being Visualised in your heads ?! Detailing: Meghna: A plain blue Kurta and a duppataa, stitched by @aneeqaofficial , free wavy hair, subtle make up @makeoverbynandha and a silver hanging. Surya: Blue jean – White tanktop teamed with a red checked shirt and Sports shoes. How much do you guys like the Sugi -Deepu version of this? 💕 . . Clicked by : @thatmadraskaran Assist : @keshu_hariharan . . #deepika #sugivijay #sugideepu #bnbcouple #recreation #kollywood #vaaranamaayiram #gvm #recreationstyling #chennaiblogger #sagittoviews

This post from her excited many of her 3 lakh plus followers who appreciated the post. Despite of the enormous number of positive comments, the post slowly started receiving criticism as well due to its wide reach. One of an Instagram user said that the duo ruined her favourite film whereas another one asked whether they saw their faces in mirror.

However what topped all these is, the comment from the main woman herself. Yes, actress Sameera Reddy saw the post and took her time to encourage the youngsters. “Hi Deepika , I happen to see this . I want you to know i am honoured to have passionate people like you that want to keep our film alive . Keep shining and I’m sending to a lot of love and hugs ❤️ Meghna” comment of Sameera read.

This kind gesture from the 41 year of actress is being lauded by the Instagram users. Comment your views on this recreation and Sameera’s reply to it.