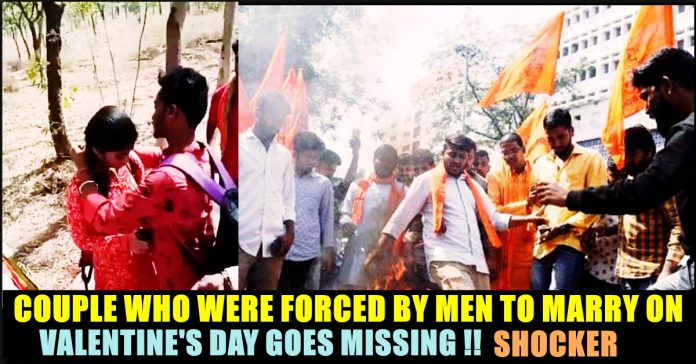 A young teenage couple was allegedly forced to marry by a group of six men in Hyderabad on Valentine’s Day. A video that is being widely shared online shows a couple surrounded by men with “tilak” smeared on their foreheads. The young man is asked to tie “mangalsutra” (sacred thread worn by Hindu women to signify they are married) around the woman’s neck. The man shooting the video is heard saying, “Thank you brother, thank you, sister,” and then they huddle around the couple to click a selfie.

On Valentine’s Day, activists of group of men caught a couple in a park and forced them to get married. The incident took place at Kanlakoya Oxygen Park in Hyderabad. Bajrang Dal activists also shot the video of the incident and shared it on social media, apparently to threaten other couples who celebrate Valentine’s Day.

The video and pictures were uploaded on social media by the men. The father of the woman received the clip from one of the relatives and informed the police.

The woman’s father first went to the girl’s college and then to the park. When he could not locate her, he approached the police. Police confirmed that men who forced the couple to get married were Hindu activists.

“A few Hindu activists came to Kandlakoya Oxygen Park and forced a couple to get married. We are verifying whether the couple gave their consent for it. We will soon identify the accused,” senior police officer Padmaja said.

Based on the complaint of the woman’s father, a case under IPC sections 342 (wrongful confinement), 354 (registered a case of assault with an intent to outrage her modesty) and 506 (criminal intimidation) was registered.

Subash Chander, State Convenor of Bajrang Dal, denied the group’s involvement in the incident. “The activists involved in forcing the couple to get married don’t belong to Bajrang Dal. We have already ordered our activists to stay away from such activities and just create awareness among the people,” he told news agency ANI.

On Valentine’s Day, 74 Bajrang Dal workers were taken into preventive custody at two separate places in the city when they tried to take out rallies without permission, police official said. 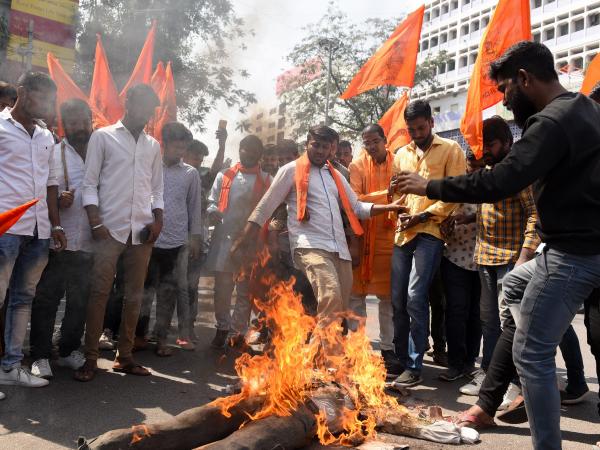 However, the latest reports indicate that neither the girl nor the boy has returned home since the incident at Oxygen park. Officials with the Medchal police issued an official statement asserting that the 19-year-old girl’s father had dropped her near an engineering college early Thursday morning from where she went to the Oxygen park to meet the boy who is believed to be a distant relative. Local law enforcement personnel also brought in the men who could be seen harassing the couple on video for questioning.

One of the six men accused in this regard has been identified as 35-year-old M Srihari Chary who claims to be a political worker associated with the Bahujan Samaj Party (BSP). He told police that harassing the couple would get him more attention and followers on social media. Deputy commissioner of police (DCP), PV Padmaja told Times of India that the boy’s father has also lodged a police complaint after the couple went missing.