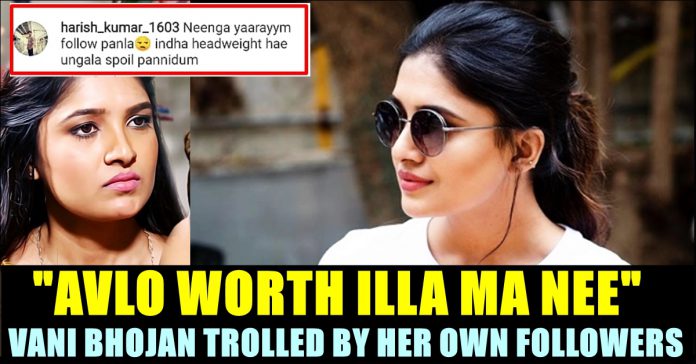 Tv stars making it to big screen is not something new to Kollywood industry. A biggest example is Sivakarthikeyan and Santhanam who started their career as mere comedians in Vijay Television and now excelling in Tamil film industry as leading stars.

Followed by them, popular Tv actress Vani Bhojan who is known for appearing in serials such as “Dheivamagal” and “Lakshmi Vandhachu” is all set to make her kollywood debut through “Oh My Kadavule” which has actor Ashok Selvan and Ritika Singh in leading roles. The film is said to have Vijay Sethupathi in a crucial role as well.

Vani Bhojan is one of the many celebrities who are very much active in social media platforms. She lets her followers know about her daily routines through her Instagram account which has followers more than 6 lakhs. She is very much loved by her followers and is often appreciated by them for the way she carries herself in some posts. Fondly called as “Chinnathirai Nayanthara” by her fans, Vani Bhajan resembles the Lady Superstar with her cute looks and expressions.

However, like every other celebrity in the world, Vani Bhojan became the victim of online trolling due to one of her recent Instagram post. Celebrities from all over the world are subject to online trolling on a daily basis. Some won’t mind and would avoid reacting to the trolls they are receiving but some will intend to teach a lesson to the trollers and will let them taste their own medicine.

One of a recent post of Vani Bhojan showed her account in Helo app. The actress shared the screenshot of her Helo app account and asked her Instagram followers to follow it in order to know about her film updates and daily routines. However, few fans witnessed that Vani Bhojan who enjoys more than 1 lakh followers in Helo app, did not following even a single person through the social media app.

Fans started fuming at the actress for asking them to follow her without following any one. “This headweight will spoil you” wrote one of her follower whereas the other one said that the actress is not that much worth.

Vani Bhojan also making her debut in Telugu film industry through Vijay Devarakonda’s debut production. She also signed to play female lead in a Tamil film titled as N4. What do you think on these comments received by Vani Bhojan ?? Comment your views below !!