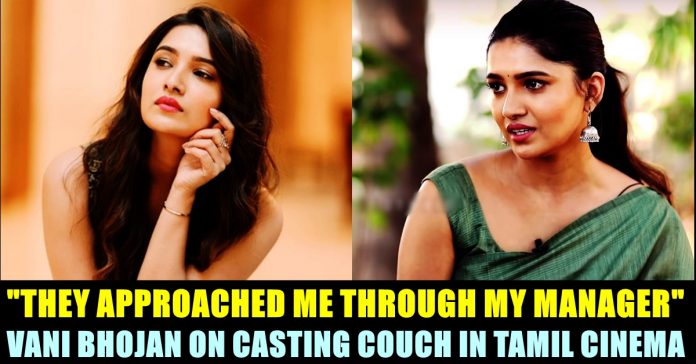 Vani Bhojan who is basking in the success of her recent release “Oh My Kadavule” has revealed how she got approached for casting couch in a recent interaction with Nakkheeran Studio. The actress who rose to fame through her Sun tv serial “Dheiva Magal”, is now debuted to silver screen with Ashok Selvan’s “Oh My Kadavule”. As the movie is running successfully in theatres, the actress appeared in this interview and revealed about many unknown facts about herself.

Talking about casting couch, Vani Bhojan said that she don’t know what those people who are approaching heroines for “adjustments” want. “We don’t know about their needs. We don’t know about what they are thinking or about their family background and about their problems. So we can’t comment about it. They are doing it because they are thinking that it is “right” thing to do. We are not doing it because we don’t want it. We should be clear” the actress said about influential people approaching heroines for casting couch.

Further Vani Bhojan revealed how she got approached for casting couch after making entry in Tamil cinema. She said that she got approached through her manager but never gave importance to such calls. “I faced one to two phone calls through manager but I never gave importance to such calls. I didn’t receive any direct contacts with any film personalities. They only contacted manager directly. I believe it will change soon. Please actors” she said in the interaction.

Watch the video below from 8th minute to 13th minute :

“I am not desperate to act in movies. I can go back to television whenever I want. Only people who are having that desperation to become a huge star in short would accept such offers. That doesn’t mean big stars doesn’t work hard. They have gone through such struggle to reach that spot” she said.

Tv stars making it to big screen is not something new to Kollywood industry. Vani Bhojan is one of the many celebrities who are very much active in social media platforms. She has a separate fan following in social media platforms for her looks and cute expressions. She is very much loved by her followers and is often appreciated by them for the way she carries herself. Fondly called as “Chinnathirai Nayanthara” by her fans, Vani Bhajan resembles the Lady Superstar with her looks and with the characters she plays.