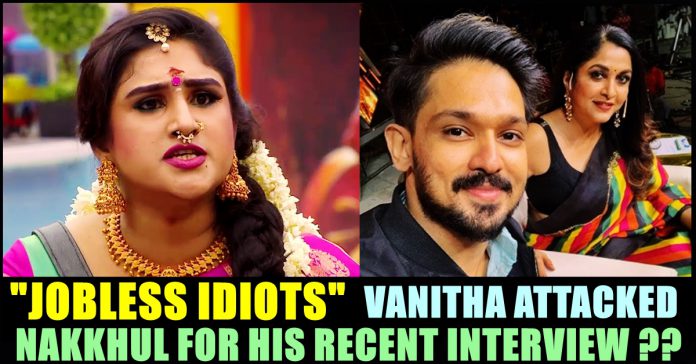 Followed by the interview provided by Nakkhul for a private you tuber channel about the issue that took place in the Bigg Boss Jodigal set, Vanitha Vijayakumar came up with a tweet reacting to a post which is related to the interview. Vanitha said that she is too busy living her life and added that she has no time to be bothered about the “blabbing jobless idiots”. It is notable that the post contained a screen shot of popular actress, director and TV host Lakshmy Ramakrishnan’s tweet and it is not clear whether Vanitha’s tweet was directed at Nakkhul or Lakshmy.

Recently, Actor Nakkhul who judged the controversial episode of BB Jodigal in which Vanitha Vijayakumar walked out, opened about the issue for the first time in an interaction with a private you tube channel named Galatta Tamil. The actor said that he heard about Vanitha Vijayakumar abusing him and Ramya Krishnan for the comments they provided for her performance. The actor also felt bad for the senior actress Ramya Krishnan who deserves the respect for her experience in the film industry.

Vanitha Vijayakumar walked out of Bigg Boss Jodigal show by releasing a press note in her official twitter handle. She said that senior actors like Ramya Krishnan should respect their fellow artists, no matter how many films she had acted in her career. The actress said that doesn’t care about a person’s personal achievements if she is not happy with someone or something in her life and added that it is her life and her rules.

“We felt that could have done much more better. But her reaction was completely different. Vanitha asked us not to compare and pointed her finger at choreographer. We never talked about the choreographer but about her energy. The song she performed was 4 minutes and she was sitting like Amman for 2 minutes.” Nakkhul said in his interaction with Karun Raman.

“We were expecting her to deliver an energetic performance but her energy was too low. It is a competition, how could one not compare the contestants ? We didn’t give harsh criticism but suggested her in a subtle way” Nakkhul said who went on to open about what Vanitha did post judgement.

“After I reached home, our team informed us that she abused us. She gave us names, she called us, she abused us. We did nothing to make her lose temper at this level. We also gave similar comments to Jithan Ramesh and he is winning today. Our staffs told us that she abused us. Forget me, I have a lot of respect for Ramya krishnan mam. She has a huge experience in the industry. Talking bad about her in front of others, talking bad behind her, it made me feel bad. I don’t want to talk about her, I don’t want to jump in the mud and get myself dirty. She needs to get help. She should have controlled her temper. That too she abused us by wearing the “Amman” costume” Nakkhul said.

Uploading the video in her timeline, Lakshmy Ramakrishnan suggested her followers to watch the video for its content, especially on childbirth and asked them to ignore Vanitha.

A twitter user uploaded the video in her timeline and tagged Vanitha. Replying to the tweet Vanitha said “too busy living my life to be bothered about blabbing jobless idiots.. what happened on the sets and what was reshot with the judges and edited to viewers are 2 different things…I didn’t accept the marks which was given to us so I made my choice to not continue..”

Absolutely…too busy living my life to be bothered about blabbing jobless idiots.. what happened on the sets and what was reshot with the judges and edited to viewers are 2 different things…I didn't accept the marks which was given to us so I made my choice to not continue.. https://t.co/win3dq9Y0R

Whom do you think Vanitha directed her tweet at ?? Nakkhul or Lakshmy Ramakrishnan ?? Comment your views below !!