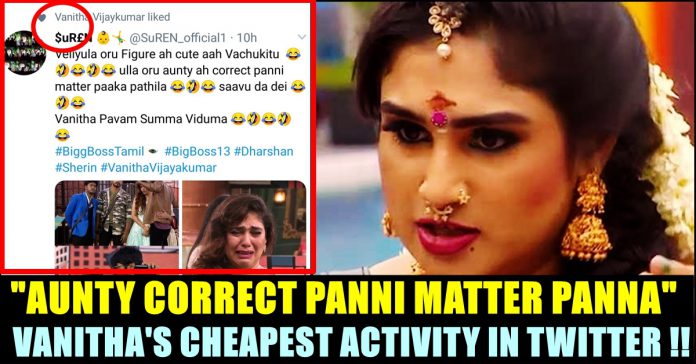 Vanitha Vijayakumar, one of the most controversial contestant of the Bigg Boss house, today became a victim of massive hatred for liking an abusive tweet against Tharshan. She got thrashed left and right by the users of Twitter for liking a cheap tweet which was posted against Tharshan.

The tweet says that Tharshan was tried to have an illicit relationship with Sherin in the Bigg Boss house despite of having a cute girlfriend outside the Bigg Boss house. The tweet addressed Sherin as “Aunty” and it also said that Vanitha’s curse won’t leave them in peace.

The twitter users who witnessed this activity of Vanitha captured the screenshot of it and spreading it as wide as possible. Check out the screenshot that is doing rounds in social media :

One of a Bigg Boss user slammed her by asking her not to call herself as a representative of strong women in the society. Another one termed this activity as a cheap one. Check out some of their reactions below :

Stop calling yourself as a rep for strong woman or any woman ! You are not !@ssakshiagarwal kindly tell @SherinShringar_ to not even have any cordial relationship with this toxic woman ever again !#BiggBossTamil3 pic.twitter.com/voqYAwJg5N

Never ever call your self a representative of struggling woman and don't manipulate saying you're a mother.

Couldnt believe how low you can stoop Vanitha!

Clearly #Vanitha is jealous of the response #tharshan got both when he was inside and when he came out. She went inside two times, nobody supported her this much. Andha Kaduppu

Chai thoo 💦💦💦💦. Sorry kamal i scolded u during the weekend episode. Vanitha deserves even more

Vanitha and Tharshan were involved in verbal spat during a task which gained Tharshan a majority number of support. Later, during her re-entry, Vanitha slammed Sherin for having a relationship with Tharshan and making him fall for her. She even said that Tharshan’s girlfriend is worrying outside because of Sherin’s attachment with Tharshan.

For past two days, Vanitha is supporting for Losliya and says that she is genuine enough to win the title. Fans who are aware of everything that happened in Bigg Boss house, witnessed this twitter activity of Vanitha only to come to a conclusion that Vanitha hates Sherin and Tharshan to the core irrespective of their skills and the bond she had before as a friend.