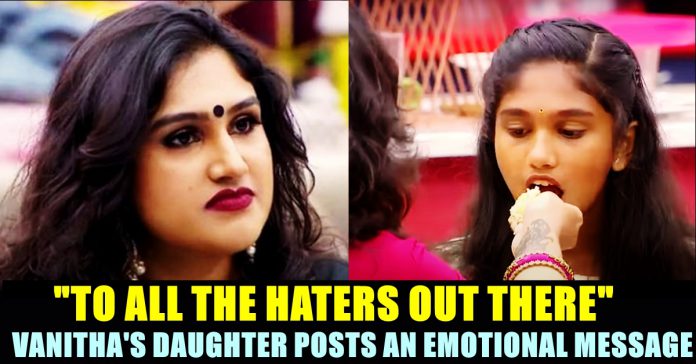 Vanitha Vijayakumar started her second innings in the media industry through Bigg Boss show in Vijay Tv hosted by Ulaganaayagan Kamal Haasan. She went on to clinch the title in “Cooku With Comali”, a cookery show which had celebrities of Vijay Television as participants. Now, the actress who started a youtube channel, is very much busy in making contents for it.

Vanitha Vijayakumar who faced the wrath of public during her stint in Bigg Boss house, got eliminated, made a comeback and won hearts of many viewers with her bold statements and with the way of approaching issues. She gained more support just few days before her eviction due to the freeze task in which she spent some lovable time with her adorable daughters.

After coming out of the Bigg Boss house, Vanitha is pretty active in social media platforms, especially in Twitter. She who enjoys a huge followers in social media platforms, now shared a post of her elder daughter and expressed her happiness. In that post, Jovika shared how much she loves her Mother and thanked her for giving her an amazing life. She asked all the kids out there to trust their mother and to never underestimate her.

While addressing the haters of Vanitha Vijayakumar, Jovika said that she is going to be with her mother forever and is going to lift her up like a pedestal. She asked her mother not to worry and said that she will always be with her to push her higher. You have already reached great heights in life all by yourself and I am witness to that because I have stood right there next to and watched you go through it all, like you are iron and life is a hammer.” Jovika wrote in her post and said that she will be a sword to her mother who is a warrior.

I truly have to thank my mum for the life she has given me such an amazing life I couldn't thank her enough, I just love and support her unconditionally. I just wanted tell you guys out there to just listen and trust your mum because she damn well knows what she is doing!…..And never underestimate her. And to all the haters out there keep do what you wanna do because I'm gonna be right next to my mum and lift her up like a pedestal like all children should to their mother. @vanithavijaykumar ma don't worry because whatever it is I will be there right next to you and push you higher! You have already reached great heights in life all by yourself and I am witness to that because I have stood right there next to and watched you go through it all, like you are iron and life is a hammer. However you are strong as you ever have been and you always will be a warrior and I will be your sword to fight through it all !! Love u loads ma! Yours truthfully, Jovika vijaykumar.

On seeing this post, Vanitha who got emotional and shared the screenshot of her post in twitter to write “Lucky me…she can rip my heart with love”

Lucky me…she can rip my heart with love pic.twitter.com/AaOwUpLwHW

As far as Vanitha’s upcoming projects are concerned, the actress earlier updated that she is going to be featured under her own production in near future. The film is titled as “Daddy” and is going to be directed by Vanitha herself.