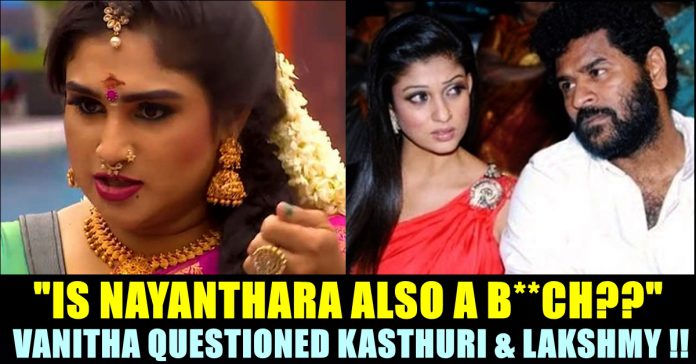 In a shocking turn of events in Vanitha Vijayakumar-Peter paul marriage, The Bigg Boss star questioned Kasthuri and Lakshmy Ramakrishnan on why they didn’t raise voice when Prabhu Deva’s wife Ramlath suffered with three kids when Nayanthara had live-in relationship with him. Things turned ugly since the video of Vanitha Vijayakumar and Lakshmy Ramakrishnan having verbal spat surfaced in youtube. Several memes, reactions and condemnation poured from every direction of Tamil internet reacting to the video where both of them assassinated each other’s characters.

Along with several Internet users, Actress Kasthuri, a housemate of Vanitha Vijayakumar in Bigg Boss show and Producer Ravindran slammed Vanitha for disrespecting a senior on air. It all started when Lakshmy Ramkrishnan appeared in a video upon Elizabeth Helen’s request and raised voice for the mother of two children. In the video Elizabeth explained Lakshmi about the conversation Vanitha Vijayakumar and Peter paul had earlier. On seeing the video of the conversation, Lakshmy said that the way they behaved during their conversation is completely unacceptable and said that their behaviour is “Atrocious” in the video.

Vanitha Vijayakumar who got irked, appeared in a live interaction with Lakshmy and abused her directly by accusing her for involving in her personal issue. Now, Lakshmy ramakrishnan posted a tweet asking her followers to trend a hashtag “I Support Elizabeth” to show the support to Elizabeth and her kids.

Folks, I want all of you to post these hashtag #ISupportElizabeth ,
the bottom line is, we cannot and SHOULD not allow glorification of a relationship without COURT DIVORCE
show your support to #Elizabeth and the kids

After the divorce what will u do where will u keep your face…let the whole world support Elizabeth..is it going to get her husband back??🙄
U people damaged everything for her already..in court she has no face now after all the accusations against the man..cheap publicity stunt https://t.co/CeO5HW3ix5

One of a follower of Vanitha said that the media channels and people like Lakshmy Ramakrishnan have no face to call out big names like Kamal haasan and Nayanthara who were involved in a number of relationships in the past. Reacting to the tweet, Vanitha asked Kasthuri and Lakshmy Ramakrishnan to state their opinions on it.

“is nayanthara also a #bitch when she was living with prabhu deva.. why didn’t u voice out for his wife ramlath who was also mother of 3 and going to court and media?” asked Vanitha by tagging their official twitter accounts.

@LakshmyRamki @kasthuri ur call on this..is nayanthara also a #bitch when she was living with prabhu deca.. why didn’t u voice out for his wife ramlath who was also mother of 3 and going to court and media https://t.co/Fd15E8TBKD

To this question of Vanitha, one of a user said that Prabhu Deva and Nayanthara never made disgusting videos in social media platforms like Vanitha and Peter Paul. He said Prabhu Deva’s wife won that case and asked Vanith not to pull someone as her back up to which Vanitha replied by saying “Won what case…she got divorce with money as settlement…exactly what #ElizabethHelen wants and will get”

In one of her recent interview, Vanitha said that she is treating Peter Paul as her adopted child and would never return him to his biological mother (Elizabeth helen).