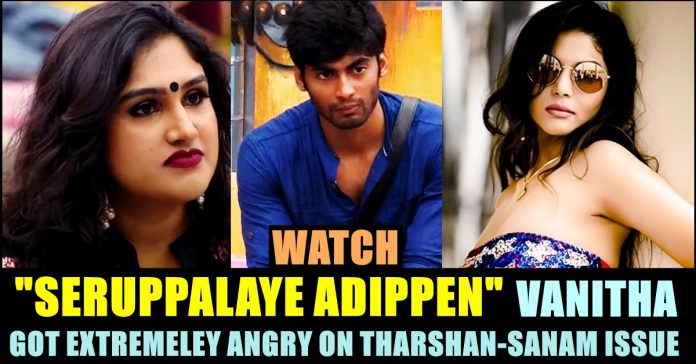 Vanitha Vijayakumar who confronted Tharshan inside the Bigg Boss house, has reacted to the issue of Tharshan and Sanam shetty which is grabbing headlines for past few days. The problem between Tharshan and Sanam Shetty started when the model registered a police complaint against Tharshan for cheating her. She has filed complaint against Tharshan for cheating, fraudulent, breach of trust, women harassment and threatening in the commissioner office, Chennai.

Tharshan, in a way of answering to her allegations, gathered a press meet and gave a brief clarification. Tharshan has said that he bought no money from her and paid back the only three and half lakh rupees she spent for him after he received the payment from Bigg Boss. Tharshan said that Sanan Shetty blackmailed him to kill herself and demanded him to declare her as his fiancee in front of media. “I didn’t like the bikini interview she gave to a youtube channel. I heard about her behaviour with her Ex-boyfriend, in a night party, through former Bigg Boss contestant Ramya and Sathya. I won’t file complaint against her but will produce the proofs in commissioner office if it is required” he said.

Vanitha Vijayakumar, in a recent interaction with a youtube channel has said that she is disappointed with Tharshan. In the Bigg Boss house, Vanitha indeed mentioned Tharshan’s relationship with Sanam Shetty to Sherin in a quarrel. She asked Sherin not to involve in a relationship with Tharshan as he already has a girlfriend outside.

“I have rights to scold him and did in the Bigg Boss house. If I meet him tomorrow, I will scold which he himself knows. He will be surprised, If I don’t scold him when we meet. We all have a personal relationship between us and I don’t want that to be ruined. What made me more angry in Sherin’s case is, I told her several times about his relationship with Tharshan” said Vanitha Vijayakumar in the interview. She is visibly irritated with the fact of Sherin having a crush on Tharshan.

On Tharshan saying that Sanam Shetty behaves more possessive, Vanitha said that she would hit Tharshan with sandlas for stating such reasons to part with Sanam Shetty. “I have seen their engagement photographs. There was so much of happiness in those pictures. Why we like heroes like Vijay and Ajith. Because they are celebrating their wives. Even if she doesn’t something wrong, you should not talk about her character in a public forum. I have a huge disappointment on Tharshan for that. I will even hit him with a slipper if he reasons possessiveness to part with Sanam. Which girl in the world lets her partner to roam around with other girls” asked Vanitha.

Watch the interview of her here :

Sanam Shetty who decided to answer Tharshan’s press meet, has appeared in a video interview. In the interview, sanam Shetty has revealed about how Tharshan avoided her since the very day he came out of the Bigg Boss show. “He met me only two times in my house after his Bigg Boss stint, that too under my compulsion. He would reason many things to avoid me and would always say that he has commitments if I ask him to give me a chance to prove myself.” said Sanam shetty in the interaction.