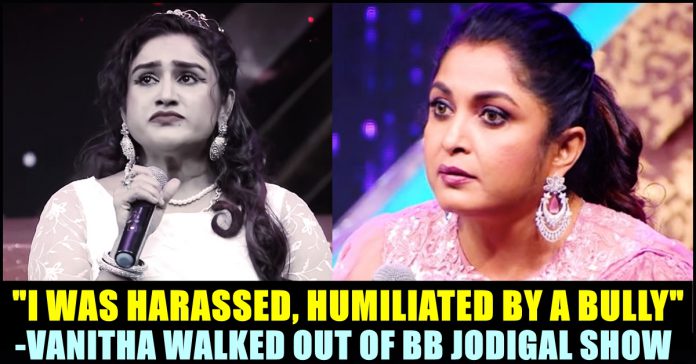 Vanitha Vijayakumar released a press note saying that she is “walking out the BB Jodigal show” after facing harassment from a woman. Vanitha said that she will never accept bullying, harassment and abuse from anyone. The actress said that she and Vijay Television has a mutual respect between each other and apologized to Suresh Chakravarthy for quitting the show which leaves him with no partner.

Opportunity to make it up to her and make her proud through your channel for world wide audience to watch…most memorable experience..I am WALKING OUT OF BBJODIGAL with a much heavy heart..but my gratitude and respect for the channel remain.. OFFICIAL STATEMENT SOON..🙏

“I am a person who will never accept bullying, harassment and abuse from anyone. Whomsoever, even if they are my own family. The whole world knows that.. Vijay TV has always been family eversince Bigg
Boss 3. I have been working with them continuously in shows like Cooku with Comali, Kalakka Povadhu Yaaru and many special appearance in their shows. We have a mutual respect towards each other that will always remain, but unprofessional & unethical behaviour in workplace cannot be accepted. I was harassed, humiliated and treated unfairly by a bully who couldn’t accept my professional growth due to ego issues.” read the press note of Vanitha.

“Not only men take advantage of women in workplace, women are worse to become jealous and try to destroy our opportunities. I am very busy with film work as lockdown almost came to an end you will
continue seeing me in my films and new shows on TV. It is heart breaking to see someone senior to you in every way and someone who has achieved working their hard way up, looks down at youngsters who are struggling their way up, insulting them and discouraging them.. Especially a single mom of 3 children who is achieving and succeeding with no family or husband support after a life long struggle.” she further said through her post.

“Women must stand by other women not make their life miserable.. it is sad bidding adieu
BBJODIGAL and wishing all the other contestants best of luck.. Winning isn’t everything
participating and taking up the challenge is most important. Sorry #sureshchakravarty had to do what was right for me.. You had to quit the show because of me. But you are a true partner who stood by me professionally in my decision.” Vanotha said.

Check out the public note of her below :

“Jealousy is very common amongst women ..unfortunately men are always subject to work place harassment accusations..#MeToo and #castingcouch irrespective of any industry. What women do to gain power and success never comes out.” Vanitha added a tweet earlier. “Women must support other women but they can’t see a replacement or a younger version of themselves growing to beat them over . irrespective of one’s success some get carried away trying to compete with someone who is just coming up..they forget their journey to reach where they are” she added.

Women must support other women but they can't see a replacement or a younger version of themselves growing to beat them over . irrespective of one's success some get carried away trying to compete with someone who is just coming up..they forget their journey to reach where they r

Suresh Chakravarthy who played Vanitha’s partner in BB jodigal replied to Vanitha’s post, writing “No worries, you don’t need to apologize.I understand and all the best for future shows” and Vanitha replied back writing “You were my best partner and all time best friend..let’s rock the film industry..all the best too”