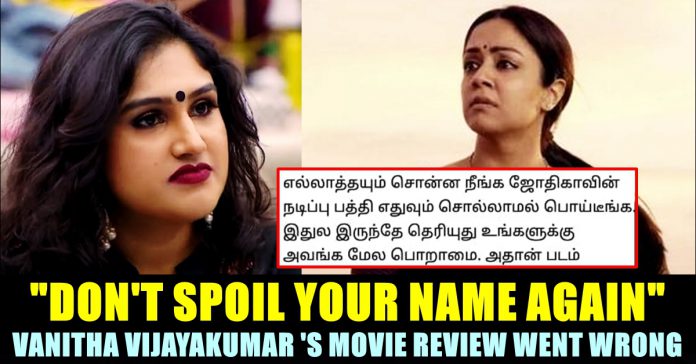 After her acting, filmmaking and cooking stint, Vanitha appeared as movie reviewer for the first time in her cinema career which spans more than 24 years. She debuted as heroine in actor Vijay’s 1995 film “Chandralekha” and made her re entry through Bigg Boss reality game show which was hosted by Kamal Haasan. Through her bold opinions and straightforward attitude Vanitha gained a separate fan base and went on to win the title of “Cook-uh with Comali”. She is now busy running a youtube channel based on cooking under her name “Vanitha Vijayakumar”.

Now, for the first time, Vanitha got her hands on movie reviewing and he the first movie she reviewed is Jyothika’s “Ponmagal Vanthaal” which was released on Amazon Prime. Produced by Suriya under his 2D entertainment, the film contained ensemble cast including Parthiban, Bhagyaraj and Prathap Pothen.

The film is based on a resident in Ooty named ‘Petition’ Pethuraj reopening a case from 2004 that involved a serial killer named ‘Psycho Jyoti’ who was convicted for the kidnapping and murder of multiple children. Venba (Played by Jyothika), Pethuraj’s daughter and an amateur lawyer, seeks to revive the case amidst oppositions. The story revolves around why Venba chose the case and on the actual truth behind the crime.

“Despite of the huge star cast, the film failed to impress me personally. Though the story and concept of the film is good, they confused us in big time through their climax.” said Vanitha who said that she is completely disagreeing with the activities of Jyothi character. “I got really confused and you decide for yourself after watching the movie” she said to the viewers.

Though Vanitha suggested people to watch the film in Amazon Prime as a full length feature film is releasing on behalf of Tamil film industry after a long time, many of the people who watched the review asked her not to review movies anymore. “Vanitha actually I admired u.. But pls dont make reviews for movies like this.. Really it’s a good movie. U have to get more knowledge to review.. This s not ur cup of coffee.” wrote one of a online user whereas another one wrote “Looks like you haven’t watched the movie or dint understand the message. Brilliant acting by jo and the other actor’s. Everybody should watch n decide for themselves”

Check out the screenshots of the comments below :

Have you watched the movie “Ponmagal Vanthaal” ?? Comment your views on this review of Vanitha !!