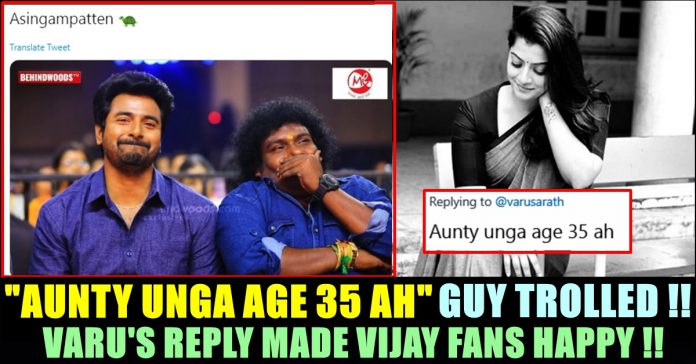 Varalakshmi Sarathkumar is known for her outspoken attitude in public forums. The actress who is known among Tamil audience for appearing in films like Podaa Podee, Sarkar et, replied to a guy who made fun of her age on her birthday. Varu turned 35 on the 5th of March and received wishes from her friends and followers.

A twitter user whose handle name read “Kanyakumari Thala fans” called Varalakshmi Sarathkumar as “Aunty” to confirm if her age is thirty five. The comment surfaced on a post of Varalakshmi Sarathkumar in which she thanked to everyone who wished her. In the tweet she even asked fans to support her recently released “Velvet Nagaram”.

Feels amazing to wake up to soo much love n positivity..truly feel blessed..thank u to every single person who took the time to wish me today..im humbled at ur love..cant ask for a better bday gift #VelvetNagaramfromTomm support me like u always have..love you all so much.. 😘😘 pic.twitter.com/rQ38GnQAEN

Varalakshmi who saw this comment, immediately replied to him by asking if he has any problem with it. “Yes uncle.. any problem..??” asked Varalakshmi to get more than three thousand likes from the users of the micro blogging social media platforms. (Also Read : Varalakshmi Sarathkumar’s Bold Statement On Casting Couch !!)

As far as her acting career is concerned Varalakshmi Sarathkumar, gaining positive comments for her recently released “Velvet Nagaram”. She debuted to Tamil film industry through Vignesh Shivan’s Podaa Podee in which she paired along with Silambarasan aka STR. Her roles in Thaarai Thappatai, Sarkar were highly appreciated by the critics. On the work front, Varalakshmi is all set to appear in Velvet Nagaram as a solo lead. Varalaxmi also turned as Host for a TV show titled “Unnai Arindaal” which will be aired on every Sunday in Jaya TV.

Comment your views this reply of Varalakshmi Sarathkumar and the reactions it is receiving !!