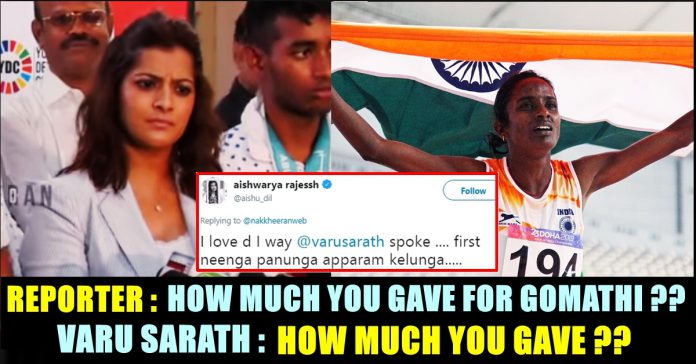 Varalaxmi Sarathkumar is an Indian film actress who has appeared in Tamil, Malayalam and Kannada films. She made her debut with the Tamil film Podaa Podi, portraying a London-based dancer. She was well known for her roles in films like Thara Thappatai and Sarkar.

Recently the actress attended the curtain raiser event of Special Olympic International Football Championship (SOIFC), which is initiated specially for the differently abled. Infact, The actress appointed as the brand ambassador for the SOIFC.

Super proud to be the brand ambassador for the Special Olympics International Football Championship for intellectually challenged children..first time in India..over 20 countries participating..good luck to all the teams.. Aug 3rd to 7th @ Nehru Stadium..its our duty to support pic.twitter.com/A7zJQZMKhI

Varalakshmi Sarathkumar kumar made it to the headlines for the way she interacted with the reporters in that event. Being spontaneous, the actress answered the questions of the reporters in a straightforward manner. The videos of her interview is currently doing rounds in the social media with various reactions from the netizens.

One of a reporter asked Varalakshmi about Gomathi Marimuthu who won gold medal in the Asian Athletics Championship which took place in Dubai. The reported asked “Why people not talked about Gomathi before getting the limelight ??” to which Varu said “Isn’t that your job to make sure her stories reach the people?? Whose fault it actually is then??” asked the actress who added “You people should be giving importance to this kind of events (SOIFC) as much as you are covering Movie audio launches and Cinema functions” she said.

This speech of her receiving many accolades in twitter. Check out some of them here :

@varusarath It is only admiration for you Ma’m! For being a true champion of others, for speaking up and more importantly, asking questions. One of the rare and love scenarios where the media is questioned on its face! https://t.co/x2DfL2J8jB

What a bold and genuine ans….Hats off u mam @varusarath…Way of ur ans gives strength to us to face this society boldly. . . !!! https://t.co/K2TUa04Kms

What do you think on these brave answers of Varalakshmi ?? Comment your views below !!