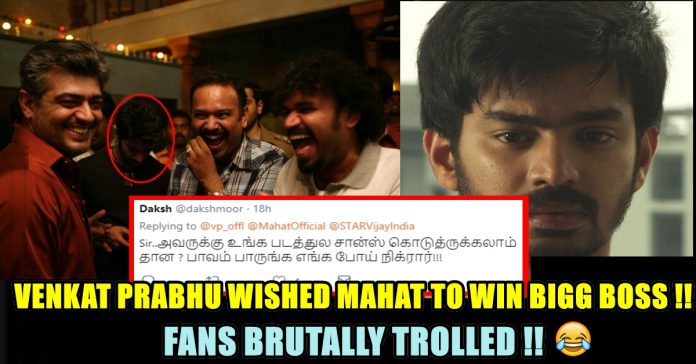 Actor Mahat Raghavendra is announced the third contestant in the Bigg Boss show. Mahat said being in the Bigg Boss house is both a boon and a curse. He performed for Shokkali song and a series of medleys. Mahat also said he is honored to have met Kamal. Mahat’s girlfriend is also seen in the gathering. He shared his association with actor Simbu.

Mahat waved good bye to his girlfriend and enters the Bigg Boss house. Ponnambalam and Yaashika welcomed him into the house. All the three are seen discussing about the facilities in the house once Mahat made his entry into the house. The actor also expressed his excitement over being a part of Bigg Boss Tamil 2. “I’m one of the contestants on the show, and I can’t wait to experience my stay in the house.” he said few days before the opening of Bigg Boss.

Director Venkat Prabhu who casted him in his block buster movie Mankatha wished him all the best to win the show. “Watch this tweet after coming out of the house after 100 days” he added.

For this many fans responded. Check out them below :