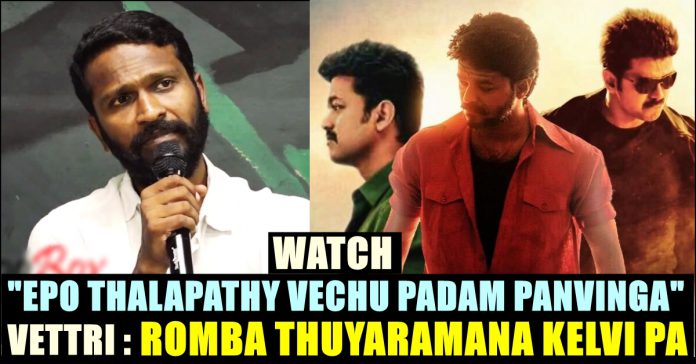 Vettri Maaran is one of the leading director in Tamil film industry who was highly believed to direct Vijay in his 65th film. However the director made the news as false by announcing his next two films with actor Soori and Suriya respectively. His last film Asuran with Dhanush became a most successful film in the year 2019 as it was lauded by both critics and audience. This made Vettri Maaran the most talked about filmmaker of the year.

In the 100 days function of Asuran, Vettri faced the wrath of vijay fans for visibly laughing when actor Pawan made a remark on “Kuruvi” running 150 days in theatres. “The last time I attended a film’s success event for its longest run is for Kuruvi. I participated in the 150 days celebration of the movie but I don’t known how far it is true. But this success of Asuran is true.” said Pawan who continued after a brief pause with a giggle. “Just now he said that I will cause danger during my speech. Thanks for giving me the opportunity to act this film. Thanks” said Pawan and left.

Fans of actor Vijay alleged that Vettri Maaran and Dhanush were seen laughing during his speech. Few even blamed Vettri for his involvement in this incident. Meanwhile, an old video of Vettri answering to an assistant director about actor Vijay has gone viral among the netizens.

The interaction of Vettri Maaran with the aspiring filmmakers took place during the release time of Vada chennai. Vettri answered to many controversial questions asked by the people who made their presence in the interaction. While Vettri was answering to questions related to his film Vada Chennai, one of an assistant director asked when Vettri is going to make a film by having “Thalapathy” in the lead.

This video which is going viral in social media platforms has added fuel to the anger of Vijay fans. However we can see Vettri Maaran was not intended to make fun of actor Vijay in the interaction. All he needed from the assistant director is to act like one instead of shooting questions like a mere fanboy of a high profile actor. He would have told this to him personally as an answer most probably.

Watch the full video of the same here :