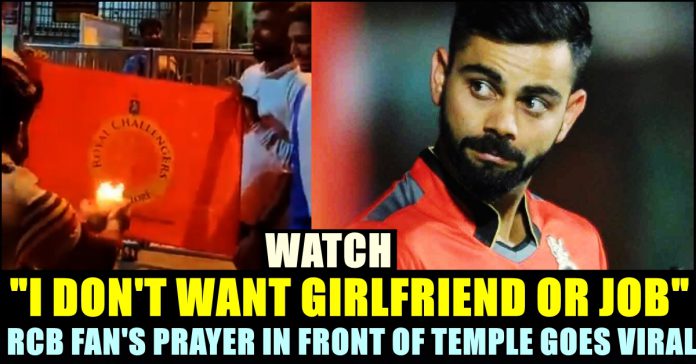 Despite being one of the strongest IPL team in the history, Team Royal Challengers Bangalore failed to lift a trophy in the past 12 years. As Indian Premier League is nearing, fans of the 8 teams can be seen involving in verbal spats in social media platforms. Meanwhile, a video of a group of friends who are RC fans praying in front of a temple for their team to lift trophy in the upcoming season is trending in social media platforms.

The most awaited Twenty20 cricket tournament is just few days away from its inaugural game which is scheduled in Wankhede stadium. The first match is going to take place between Chennai Super Kings and Mumbai Indians. Players are practicing for the longest Twenty20 tournament which is going to start from 29th of March. In a way of starting the tournament with a positive note, Royal Challengers Bangalore changed their logo after 5 long years.

Team Royal Challengers Bangalore is one of the very few teams which haven’t won a tournament so far despite of having Virat Kohli as its captain. Fans of the team are very much eager this year for their team to lift the cup for the first time in history which is evident through their social media activity. Now, this group of fans we mentioned above, went one step above to express their love towards their team.

Standing in front of a temple with RCB flag, the fans chanted “Jai RCB”, video of which is going extremely viral in social media platforms. One of them can be heard saying “I am not praying for a job or a girlfriend. I only want RCB to lift the trophy this year, kindly bless them”

Watch the trending video below :

“I am not praying for a job or for a girlfriend, I only want @RCBTweets to win this IPL, kindly bless the team,” says #RCB fans seeking blessings of goddess Chamundeshwari in #Mysuru. Holding the RCB flag fans also broke the ‘Edugayi’ to fulfil their vows. @XpressBengaluru pic.twitter.com/XNll5B1lwV

Not only the fans, even the team is very much eager to lift the trophy which is evident through their activities. This time, the team is going to compete with their opponents with a strongest oversees batting line up which comprises AB De Villiers, Aaron Finch, Joshua Phillipe. As far as the bowling line up is concerned Dale Steyn, Kane Richardson, Isuru Udana were roped into the team. The franchise also changed the whole new team management by appointing Mike Hesson as their director of operations.

Comment your views on this video of RCB fans seeking help from God to win the trophy !!