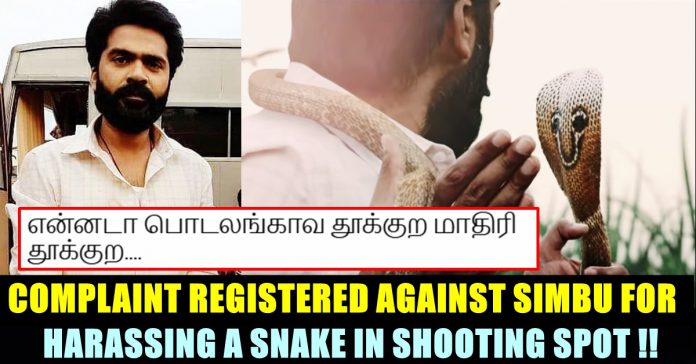 Simbu who made his comeback recently with his massive body transformation, found himself amidst controversy one more time. The actor is currently busy shooting for Suseenthran’s “Eeswaran”, first look and motion posters of which released recently through the actor’s official twitter account. Now, an incident that took place in the shooting spot of “Eeswaran” left him in trouble it seems.

Fans of actor Silambarasan aka STR are extremely happy like never before due to the physical transformation their idol displayed recently. He became the talk of the town with a single photoshoot and the back to back updates he provided about his upcoming films left his fans go gaga. The actor reduced 30 kilograms by involving himself in various kind of activities, thanks to his fitness trainer Sandeep Raj.

After making his come back into the industry after his 2019 flick “Vantha Rajavaa Thaan Varuven”, STR released the first look of his upcoming film “Easwaran” which is being directed by Suseenthiran. Titled as “Easwaran”, the first look of the film showed Simbu carrying a snake in his shoulder with his newly developed physique, wearing dhoti and shirt, standing amidst a Sugarcane farm.

Going by the BGM scored by Thaman and the voice over provided by Simbu at the end of the motion poster, the actor seems to be playing a seasoned young cricket player of a rural part of Tamil nadu. It is notable that Suseenthiran is known for his sports drama films such as “Vennila Kabaddi Kuzhu”, “Jeeva” etc.

Now, a video of the actor slowly lifting a snake from a tree and putting it up in a sack is going viral in the social media platforms. The actor was seen donning the “Eeswaran” get up and few men were also seen helping him in putting the snake in the sack.

Now, it has been reported that a man has registered a complaint with the Forest department against Simbu for harassing the snake. Further updates regarding the case are expected to surface soon.

Simbu who is a darling of controversies, was last seen in a short film “Karthik Dial Seitha Enn” directed by gautham Vasudev Menon. Before the lockdown announcement, Simbu was actively participating in the shooting of his upcoming film “Maanadu”. The makers of the film such as producer Suresh Kamatchi, Director Venkat Prabhu commenced the shooting of it after so many struggles. As the film requires a mass crowd atmosphere, the shooting of it is currently halted.