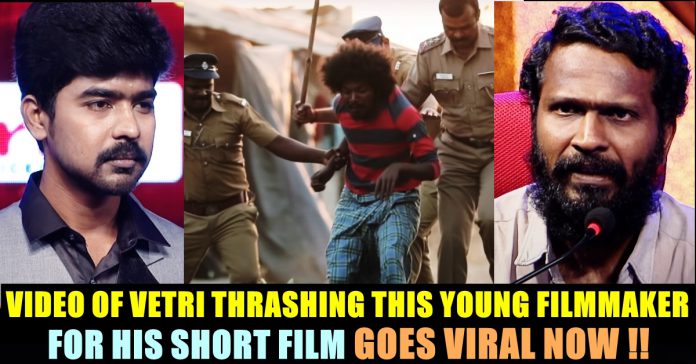 Known for his socially responsible films, Vetri Maaran always raised voice for the oppressed through his films. His latest venture “Asuran”, an adaptation of Poomani’s novel “Vekkai” is one of the prime example for his concern over the oppressed people. For his production venture “Kaaka Muttai”, the film which talked about the lifestyle of two working children of Chennai slums, the filmmaker won awards as a producer as well. Now, an old video of the filmmaker criticizing a short filmmaker for his “flawed” perception on oppressed people has been trending in the social media platforms.

On 4th of September, Vettri celebrated his 45th birthday. He who is currently working on the pre-production of his upcoming films amidst the lockdown, is also involved in farming near Vedanthangal. Years ago, the filmmaker appeared as one of the judges in a show called as “Naalaya Iyakkunar” telecasted in Kalaignar TV.

The show would require young aspiring filmmakers to make short films and would announce the winner during the final episode, based on the films he made throughout the season. It is notable that big names such as Karthik Subbaraj, Alphonse Putharen, Bobby Simha, Vijay Sethupathi participated in the show before debuting in film industry.

On the birthday of Vetri Maaran, this particular video of him schooling a participant on how not to portray the oppressed people after watching his short film went viral in social media platforms. The short film which was titled as “Oru Naaluku Oru GB” showed how a teenage guy who belongs to a slum, involves in sexually abusing a child after getting the access to use a smartphone.

The short filmmaker showed two boys (Sappa and Vella) who belongs to a slum area as garbage pickers. Sappa finds a phone while working and manages to get Internet access to it by recharging. He starts using the phone to watch pornorapgic films, influenced by which he rapes a child playing nearby and records it in the phone.

“Vella”, after seeing the video in the phone, informs police and gets his friend “Sappa” arrested. The film ends by Vella throwing away the short film. After watching the film, Vetri Maaran, one of the three judges, said that he has a lot to talk about the film.

Vetri said that he questions the storyline chose by the short filmmaker. He said that the film is biased as it shows the dark skinned teenager as a sinner and fair skilled one as a good. “The film is filled with misconceptions and wrong ideologies.” says Vetri who goes on to add that he got very angry after seeing the film.

When the short filmmaker said that he did it unintentionally, Vetri pointed out that it is more dangerous to do it without conscious. Vetrimaaran also trolled the opening shot of the film where it was shown that the two boys are struggling to defecate.

“These kinds of crimes are taking place against poor people. Very few number of poor people are committing such crimes and you have to approach it with clarity while filming it. The way you have shot it also, it hurts. I don’t agree with the way the film is made.” said Vetri. “What are you trying to tell through the scene where the boy throws the phone away? Do he have to live without phone throughout his life ? You have your phone, right ? Have you thrown it away ? So you people can have a phone and he should keep picking garbages throughout his life, it is what you are saying ?” the filmmaker questioned and said that his perception is completely flawed. He requested him to change it by saying that he got offended on seeing his film.

Watch the video that is trending below :

Here’s the short film that Vetri Maaran reacted to :

Comment your views on the Vetri reacted to the short film !!