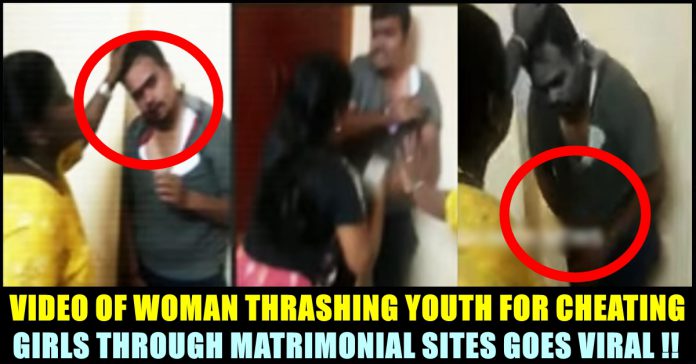 Video of a youth getting thrashed by a young woman for cheating herself and other girls is going viral in social media platforms. It has been reported that a youth named Gokula Krishnan has been cheating girls in the pretext of marrying them and swindling money from them through matrimonial sites. One of his victims who found him cheating her, with the help of her relatives, thrashed the guy and recorded the same as video which is being widely circulated in online media.

Gokula Krishan got introduced to a young girl who is working in a private hotel that is located in Ekattuthangal, Chennai. The girl who belongs to Trichy, met Gokula Krishnan through a matrimonial site. In the pretext of marrying her, Gokula krishnan made the girl to involve in video calls with him. After gaining her trust by maintaining an intimate relationship, Gokula Krishnan reportedly bought Rs. 1.25 lakh to the victim, citing emergency.

Later, Gokula Krishnan accused girl of having relationship with another man and ended his relationship with her. He also cheated another girl after receiving 30 sovereigns of gold from her, according to reports. The girl who lost her belongings to him, made him to reach a house of her relative that is located in Jafferkhanpet, Chennai to attend a feast. After reaching, she asked him to give her belongings back. When the argument heated, the girl’s cloth damaged and she started thrashing Gokula Krishnan with the help of her relatives.

With blood leaking from his mouth, The woman attacked Gokula Krishnan and recorded it as a video. At a point, she attacked him with sandal and broom stick. The video shows Gokula Krishnan begging her to wait for “one minute”. Relatives could be heard suggesting the woman on where to hit him. When they complained against Gokula Krishnan in Guindy Police station, he was admitted at Roypettah government hospital for the treatment for his injuries.

However, based on the complaint made by Gokula Krishnan at Kumaran nagar Police station, Police arrested the young woman along with three others and released them in bail, says reports. However, video of the woman and her relatives thrashing Gokula Krishnan left and right is going viral in social media platforms with various kind of reactions.