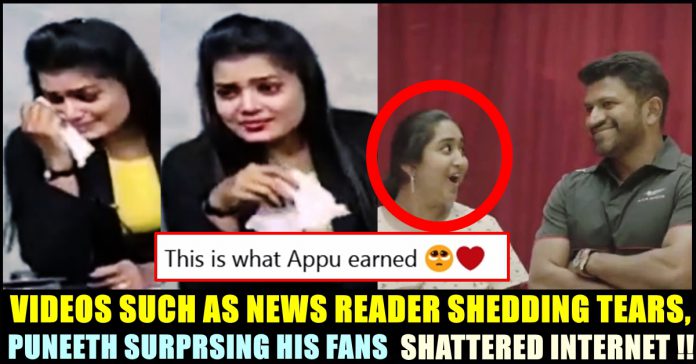 Ever since the official announcement on Puneeth’s demise surfaced, fans has been sharing the videos and clippings of the actor from his films and events, in a way of remembering him. Many are still in denial as the actor looked very much healthy and was just 46 when he left the world. Almost all the celebrities from South Indian film industry uploaded posts to pay respect to the Kannada Super star. A video of a news reader shedding tears before making the news about Puneeth’s demise and the actor surprising his fans while they are talking about him to camera are shattering the Internet.

After a brief moment of confusion between whether the actor was getting treatment or left the world, it was officially announced that the actor passed away due to fatal cardiac arrest. Reports suggests that Puneeth was working out in his Gym when he suffered the sudden attack and was rushed to a hospital immediately. The actor was admitted to Vikram hospital and was monitored by the doctors in the intensive care unit, moments before the devastating news about his demise shattered the entire country. With Punith’s peers and closed one reaching the hospital premises, fans broke down emotionally and are still in denial.

This was Puneeth Rajkumar's last public appearance, just 24 hours back!

Life is so uncertain! pic.twitter.com/5njlaGRkVc

Fondly called as “Appu” by his fans, Puneeth is a son of legendary actor of Rajkumar. He has acted as a hero in 29 films. Entering film industry as a child artist, he won national award for acting as a child in the film “Bettada Hoovu” in 1985. Last seen in “Yuvarthnaa”, Puneeth recently wrapped up with shoot for “James” with director Chethan Kumar. He was supposed to join hands with director Pawan kumar for “Dvitva” but the uncertainty of life changed things completely.

Video of a news reader shedding tears after reading the news about Puneeth Rajkumar’s demise left many fans to go extremely emotional. She could be seen consoled by her co workers. After drinking water, she gets back to work and reads news with her voice breaking due to deep sorrow. She talks about what all achieved by “Appu” throughout his acting career to the viewers. “This is what Appu earned” a user said while sharing the video.

This is what Appu earned 🥺❤️ pic.twitter.com/j7xlsF0OSY

Another video of the actor surprising his fans while they are expressing their admiration towards him made people to break in tears. In the video which is doing rounds, we could see the actor responding to the words of his fans by standing behind them and surprises them by hugging and patting on their back. Director Vignesh Shivan, Actress Priya Anand , MP of Bengaluru centre PC Mohan shared the video in their twitter timeline.

Puneeth Rajkumar’s affable nature endeared him to people across generations. His genuineness will stay in our hearts forever.#PuneethRajkumar #Appu

Check out some of the other videos that are trending after Puneeth’s demise :

When Appu smiles for SKs mimicry speech and mention!

Not Just A Great Actor 45 Free Schools , 26 Orphanages , 16 Old Age Homes , 19 Goshala's
1800 Students Free Education and Puneeth Has Donated His Eyes Before Death Like His Father !
A Great Human Being Too ❤️ @PuneethRajkumar ! pic.twitter.com/6p64BbehsF

Let us pray for the soul of the Superstar actor to rest in peace !!