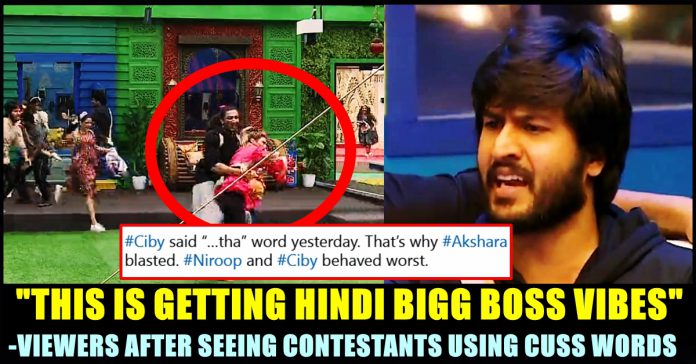 Bigg Boss season 5’s 38th episode grabbed huge attention among the it’s viewers as it contained a task that challenged all the contestant’s physical ability. Audience took a bit aback by the verbal exchange that took place between Niroop, Varun, Akshara and Ciby while performing a doll task. It all started after Niroop caught hold of Akshara to prevent her from completing her task in order to make Varun fail in the task. Varun abused Niroop and the latter didn’t resist himself from abusing the former as well. Ciby intervened and questioned Akshara only to make her shout her lungs out due to frustration.

Online users who watched the episode came up with various kind of reactions. However, Raju, with her light hearted humour, won the hearts of fans once against amidst the tensed situation. On the 37th day of the show, Bigg Boss provided a task to the contestants, asking them to reach a tent with a doll that contains any of their fellow contestant’s name to save them. The last one who reaches the tent will be considered as a loser and the contestant whose name is in the doll of the loser will be rejected from the luxury task.

Priyanka Deshpaande became the first contestant to get rejected from the luxury task after Thamarai failed to reach the tent on time due to Niroop’s interruption. In the second round, Niroop, in order to make Varun fail, caught hold of Akshara and stopped her from reaching the tent. Agitated Varun started abusing Niroop and Akshara expressed her frustration over the latter as well. In the next round, Varun and Niroop grabbed the dolls of each other and refused to enter the tent. Bigg Boss cancelled the round and cited the foul game of the contestant.

During the heated argument that took place between the trio, Ciby intervened and questioned Akshara for the way she caught hold of him in one of the previous tasks. When Ciby used the “O” word to express his dejection, Akshara shouted at him with cuss words. Behaviour of these four contestants became a subject to criticism. Various kind of reactions flooded the micro blogging social media site, supporting and opposing the contestants. A user uploaded the video of Raju narrating how he lost in a humorous way and said that he eased the heated situation in his own way.

A follower said that he is getting Hindi Bigg Boss vibes and blamed all the contestants who are involved in the abusive verbal exchange. Check out some of the reactions that surfaced based on the episode below :

The way #Niroop holding #Akshara is wrong & Aksh WILL voice out for her if she is uncomfortable,whats wrong in it?
Akshara haters ,just DON'T blindly beat around the bush.Thanks.#BiggBossTamil #BiggBoss5Tamil #BiggBossTamil5 pic.twitter.com/6KmaPAWATe

#BiggBossTamil5
Getting Hindi Bigg Boss Vibes ! From Today's Episode! Content is flowing like someone! #BiggBossTamil
Ciby 👎👎
Niroop 👎👎
Varun 👎👎
Each were wrong in some ways. Usage of bad words was in peak.

BOTH #Akshara & #Varun ARE TRUE to their emotions.

Akshara could have easily trapped #Niroop by using woman card for holding her, but she did not use it#Ciby irrelevantly brought milk bottle issue & spilled a WORD

Some people asking to give red card to Ciby, for using an abuse! Then give red card to Niroop Varun & Akshara also! They too used abuses yesterday!
Not defending Ciby! Him using cuss word was wrong! But treat every1 equally! Ur favourism is blinding ur reasoning!#BiggBossTamil5

Even men inside BB cannot escape from tis #Niroop holding from the back …#Akshara point is right …#Cibi downfall rapidly👎 #biggbosstamil5 pic.twitter.com/ucqUFF9c5m

#Akshara is a beast when it comes to physical task!

– She was the first one run into tent in first two rounds🔥🔥
3rd round – She managed to enter into the tent despite #Niroop holding her strongly🔥#AksharaReddy ❤️💪🏼🔥#BiggBossTamil #BiggBossTamil5 pic.twitter.com/FQ2PR8SOWT

Akshara and Varun are right, but a bit aggressive

Not defending Niroop, but both Varun/Akshara used lots of words on Niroop even body shaming word but no one made a big deal out of it. Ciby used that word in a sentence not at her but she took it as at her and created big scene. I don’t think that’s fair #BiggBossTamil5 https://t.co/CLUV9SEfL2

I never expected cibi will come & support Niroop. Now its confirmed as Akshara said on Monday episode Cibi is carrying grudges. Cibi is taking revenge for milk task, though akshara spoke to him and clarified everything after the task on that day itself. I support Akshara

#Raju. Finally a stressbuster moment amidst a chaotic episode. He knows how to brings back the feel good vibe and calm the situation with laughter. A good laughter riot. #RajuJayamohan #BiggBossTamil5 #BiggBossTamil #BiggBoss5Tamil #BiggBoss #Vijaytv pic.twitter.com/7BSHdrJp1G